The little dog was trapped in the sewer for several days

This is the touching moment when a group of volunteers rescued a puppy that got trapped inside a storm sewer in an Athenian suburb.

The Star-Special Team Animal Rescue were called by residents of Psychiko who could hear the cries of the puppy over several days.

The volunteers went down in the sewer to rescue the frightened dog which was later transferred to a vet.

There’s no word on how the dog came to be trapped in the sewer. 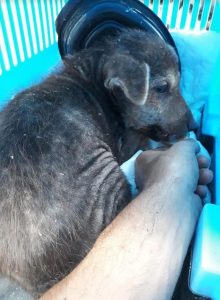