This is the article and the video that comes with it.

A new girl on the Montreal drag scene is making the city’s other queens look geriatric by comparison. That would be Lactatia — a.k.a. Nemis Quinn Mélançon Golden, an 8-year-old who started getting into drag at the ripe old age of 7.

Encouraged by his supportive parents, Lactatia began taking voguing classes to perfect his art. Lactatia’s public presence grew exponentially after he recently appeared at the Montreal stop of the Werq the World drag tour. RuPaul’s Drag Race star Bianca del Rio invited Lactatia up to the stage and the younger queen charmed the dress off the older queen (though Lactatia admitted his favorite Drag Race queen is Ginger Minj).

Later, Lactatia would perform in a Montreal voguing contest, wowing the crowd with his lithe moves. Looking like a living porcelain doll, Lactatia received a trophy as his parents beamed.

“Anyone can do what they want in life,” Lactatia told LGBT in the City. “It doesn’t matter what anyone else things. If you want to be a drag queen and your parents won’t let you, you need new parents.”

Outside of drag, Lactatia is an avid skateboard enthusiast. 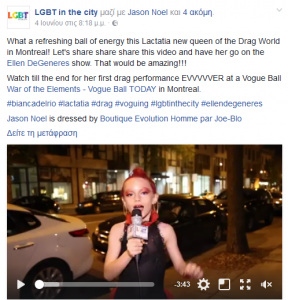