Floyd Mayweather and Conor McGregor wrapped up their four-stop international press tour last Friday at the SSE Arena at Wembley Stadium in London England, and one fan managed to get in by creating a fake press pass.
Youtube user Zach Alsop recently gave a detailed account of how he discovered a photo of the necessary credentials on Instagram and then crafted an identical copy.
With a suit and his [fake] laminated credentials, Alsop was able to sneak into the arena with Mayweather’s camp and ultimately stand alongside Conor McGregor as he made his way to the stage in London. His video has got him over 800,000 views so far with most comments lauding him for his brazen approach,
Check out the video footage below. 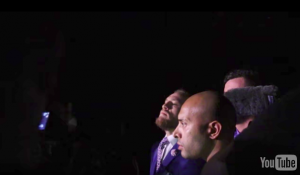