UPD: At about 3:30 pm, the organisers of the rally announced from the loudspeakers that the participants in the rally are 500,000! Many buses with citizens who wanted to reach the gathering are stuck at road toll at Malgara. Sources of the organisers reported that in Thessaloniki, a total of 1,300 coaches had arrived from all over Greece.

All MPs of major Greek opposition party New Democracy (ND) and government coalition partners ANEL from northern Greece have attended the rally including MEP Eva Kaili, Regional Governor Apostolos Tzitzikostas and Metropolitan of Thessaloniki Anthimos, whose speech began at the rally at 14:15.

Thousands of people have already gathered on Thessaloniki’s coastal avenue to participate in the rally for to voice their objections for the name of FYROM and the prospect of Greece conceding the name “Macedonia”. At around 1.30pm the organisers of the event told protothema that some 40,000 people had already gathered in the area in front of the statue of Alexander the Great taking part in the demonstration. The same sources added that the peak of the protest is expected at about 2:30 pm, explaining that the turnout of the world is continuing at an undeniable pace.

People mainly from Macedonia and from other parts of the country have arrived in Thessaloniki to send a strong message to the Greek government and FYROM about the non-use of the term Macedonia in the name of Skopje.

The crowd is chanting “Hellas – Macedonia”, “No to the double name”, “Not a new betrayal” and are singing “Macedonia themed songs. Loudspeakers are playing songs by famous Greek composer Mikis Theodorakis, who recently made his position clear on the matter, harshly criticising the current government over the possibility of |selling out” the name Macedonia. 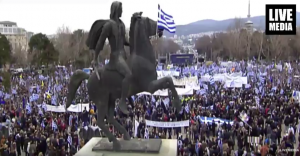 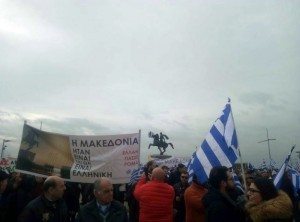 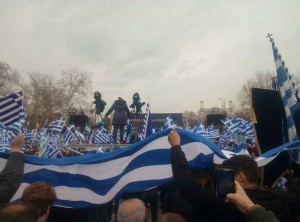 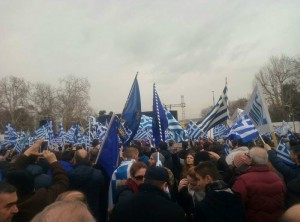 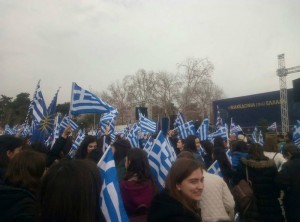