Heavy snowfall and cold weather are causing problems around Greece.

Shelters from the cold
Athens Municipality services announced on Monday that they would provide areas to shelter for people who are homeless or can’t afford electricity during the cold snap that has hit Greece. There are two centers with central heating that have been ready to welcome guests since Tuesday and they are open on a 24-hour basis. These are the Friendship Club in Grava (6 Taygetou Road, tel 210 223 1419) and the 4th Municipal Community Offices in Kolonos (cnr of Lenorman and 35 Alexandrias Road, tel 210 515 7882). There is also a 24-hour phone line 1595 and the Athens Municipality Reception and Solidarity Center (cnr of Sofokleous and Pireos sts) that are operating 24×7 for people needing help due to the current weather conditions.
The Municipality of Pireaus is also offering similar facilities are being offered at the municipal Guesthouse for the Homeless (I Anakoufisi – Relief) and the Panagiotis Salepas municipal gym that is open to overnight guests until the weather improves.
In Thessaloniki, the municipality has added extra indoor heated spaces to serve the homeless and other vulnerable groups until January 5.

Ferry routes disrupted
Problems on ferry routes are caused by winds at 9 to 10 Beaufort. Ferry disruptions were noted at the ports of Piraeus, Rafina and Lavrio. Only routes traveling to the nearby isle of Aegina are leaving the port of Piraeus. Routes on the Perama-Paloukia Salamina lines are working as usual, however at Rio Antirrio there are no routes from Kavala-Prinou, Keramoti-Thassos and Alexandroupolis Samothrace. The routes from Igoumenitsa-Corfu and Kyllini-Kefalonia-Zakynthos are operating as usual.

Road networks shut down
The road network of Malakassa, Markopoulos-Oropos, Kalamos-Oropos, Kapandriti-Afidnes and Ippokratios Politia have been advised to use snow chains as heavy snowfall makes traffic conditions dangerous in the greater Athens region.
In the region of Attika, where Athens is located:

The region around Viotia Castle had problems for at least seven hours when a large lorry remained stuck whereas traffic from Elefsina road, Dervenohori and Fylis highway at the height of Kleiston Monastery was stopped at 9 a.m. Problems were noted at the regional highway of Penteli-Nea Makri and Parnitha Highway from the cabin lift to the casino.
Snow has had an effect on most of the road network in the central Peloponnese with traffic disruptions in the city of Tripolis that was hit by a blizzard. Cars with snow chains moved slowly while remote villages in mountain regions are isolated due to roads shut down. 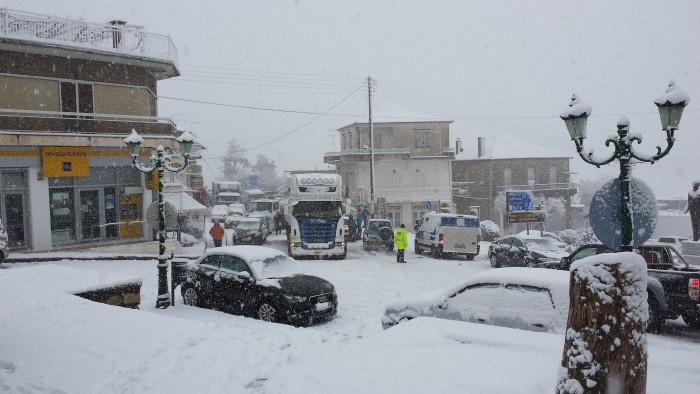 The road between Athens and Nemea in the Peloponnese is open to traffic but cars are moving slowly. The road to Tripolis was gradually opened but cars need snow chains. Cars on the Corinth-Tripolis-Kalamata road also need snow chains. Toll gates are shut to facilitate traffic.
The Tripolis-Sparta national highway from the 30th km to the 25th km at Karyes junction and the Sporti-Longanikos-Megalopolis road have encountered difficulties due to snow.
In South Evia

Lorries that are over 3.5 tons have been stopped from circulating around Arcadia from 4 p.m. 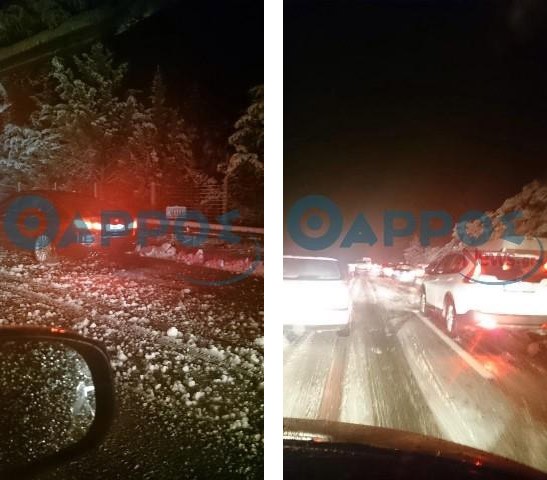 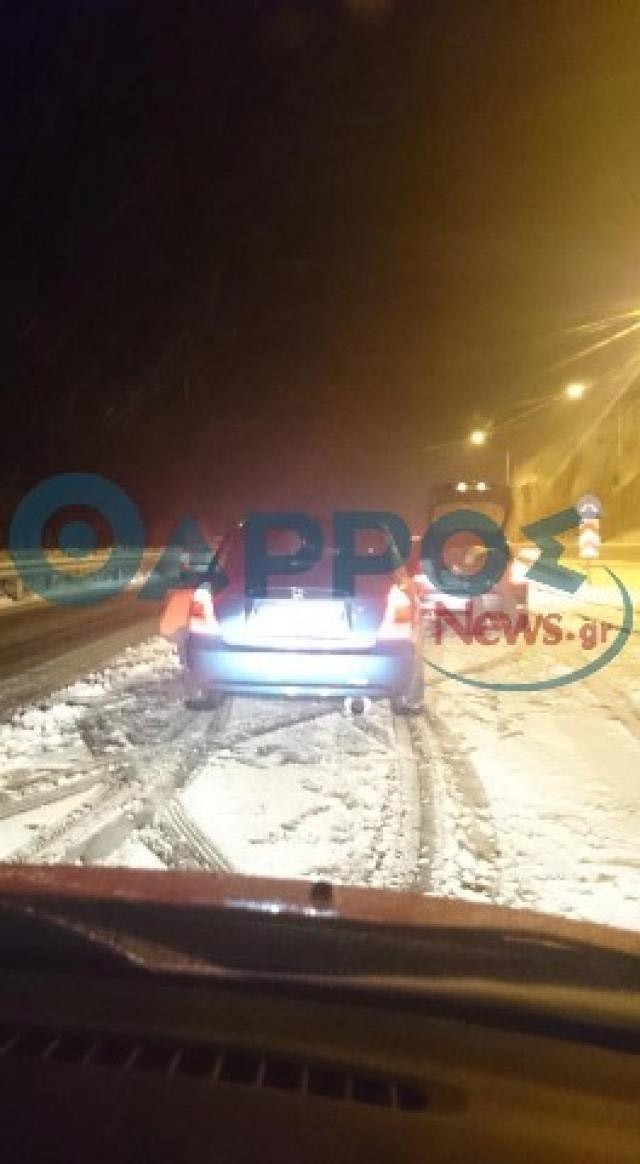