First, it was the Formula 1 “grid girls”, now this. The world slowly becomes very dull… 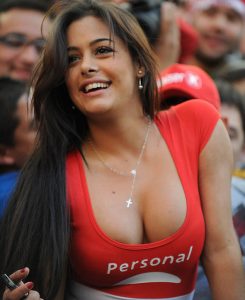 He added that FIFA was not yet being “proactive” about the policy but would “take action against things that are wrong.”

The “hot female fan” image is widespread in coverage of the World Cup. Photo agency Getty Images recently came under fire after it published…a photo gallery of “the hottest fans at the World Cup”! 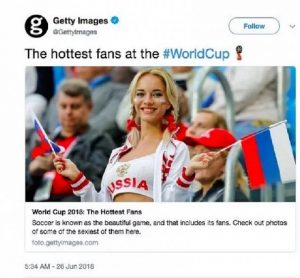 “Soccer is known as the beautiful game, and that includes its fans,” the subheading read. “Check out photos of some of the sexiest here.”

Twitter users were quick to slam Getty Images for the piece, calling it “pretty sexist” and “inappropriate”.

Following the backlash, Getty Images took the piece down and expressed regret, admitting it did not meet its editorial standards.

“There are many interesting stories to tell about the World Cup and we acknowledge this was not one of them,” it said.

Before the World Cup kicked off in Russia, there were widespread fears that racism and homophobia would be the most pressing problems at this year’s tournament. Many pointed to Russia’s notorious anti-LGBT legislation and to previous incidents involving Russian fans engaging in racist chants at matches.

30 instances of women being accosted, either Russian fans or female journalists, have been referred to #FIFA by @farenet, which combats discrimination in #UEFA level.#WorldCup #FIFAWorldCup2018 #Russia2018
Read more at: https://t.co/DO54iSKiWJ

However, sexism has been the main focus of discrimination.

FIFA is collaborating with the anti-discrimination group Fare Network to monitor the behaviour of fans in Russia. Its executive director Piara Powar insists that sexism has been one of the biggest problems at the tournament.

Powar shed light on how instances of female reporters being kissed or grabbed on live television are becoming a common phenomenon at this year’s World Cup. He also revealed that the group has come across more than 30 cases of Russian women being “accosted” in the streets by male fans. 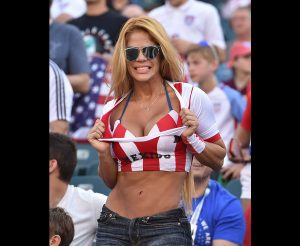 At a briefing on Wednesday, Addiechi acknowledged the sexist incidents and said FIFA planned to talk with national broadcasters and its own TV production team about the issue.

He said FIFA has been working with Russian police to identify fans who have assaulted female reporters. 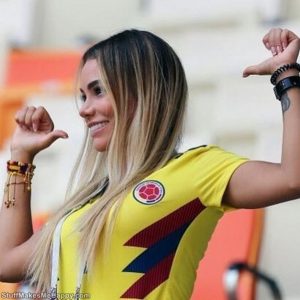 Some of them have lost their FAN IDs — the documents required for all spectators to access World Cup stadiums — and been forced to leave the country as a result of such behaviour, he added.