A war by proxy

On July 26, Libya’s internationally-recognized government announced a brazen air raid on a hangar housing drones deployed in support of rival commander Khalifa Haftar. A day later, his forces said they retaliated with strikes on a military base that sent fireballs into the night sky.

Neither side officially acknowledged the worst-kept secret of the North African state’s civil war: as the opponents face a stalemate on the ground, their backers in Turkey and the United Arab Emirates are engaged in an aerial campaign that’s seen them target each other’s unmanned planes in a bid to determine Libya’s future in their favor. 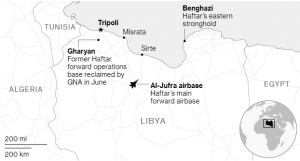 The Tripoli government’s attack on the airfield in Jufra was carried out by Bayraktar aircraft owned and operated by Turkey, according to two Western diplomats and a Libyan official, who all spoke on condition of anonymity. The U.A.E. struck back with Chinese-made Wing Loong drones, according to the two diplomats and an Arab official, targeting Bayraktars located in the coastal city of Misrata. Airstrikes have also destroyed three Ukrainian cargo planes supplying both sides.