Brunei recently introduced new Islamic laws making homosexuality an offence punishable by stoning to death. The move attracted international condemnation and its part of a wider range of strict laws against a host of other crimes such as theft being punished by amputation. Homosexuality was already illegal in the small South-East Asian country with offences punishable by up to 10 years in prison.

According to ILGA, an international federation campaigning for LGBT rights, homosexuality is punishable by up to eight years in prison in 31 countries and 10 years to life in prison in another 10 countries. The following infographic shows the countries where the death penalty is used against homosexual activity and it also uses another group, Equaldex, as a source. It is important to note that it is used on a regional basis in parts of Nigeria and Somalia where sharia law has been adopted. Notably, it is also used in Qatar (only applying to Muslims) which will host the FIFA World Cup in 2022.

George Clooney, Ellen DeGeneres and a host of other celebrities have been calling for a boycott of luxury hotels owned by the Sultan of Brunei. The country’s government released a statement on its website saying the sharia penal code will be fully implemented on Wednesday. 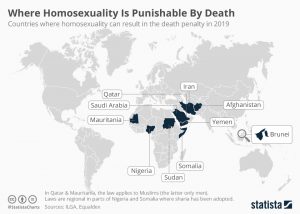