Donald Trump initiates an investigation into car imports and how they affect U.S security

Having repeatedly stated his discontent with the United States’ role in world trade, U.S. President Trump has been pushing for a more protectionist policy in recent months. Following the formula that enabled him to impose tariffs on steel and aluminium earlier this year, Trump initiated a trade investigation into whether car imports pose a threat to national security this week with the apparent goal of raising tariffs on foreign cars.

While Trump argues that tariffs would help protect American jobs in the car industry, many experts think that he could try to use them as leverage in future trade negotiations, as he has done with the steel and aluminium tariffs in the past. As the following chart illustrates, Mexico and Canada would be particularly vulnerable to U.S. tariffs on car imports, having accounted for 24 and 22 percent of American car imports (in terms of value) last year. 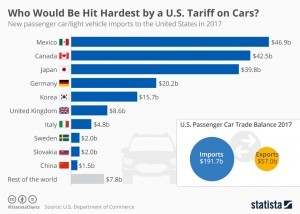