The Japanese leader is at the top of the list

According to an analysis of 2018 flights of world leaders, Japanese prime minister Shinzo Abe racked up the most CO² emissions. He produced more than 14,000 tons of CO², followed by U.S. President Donald Trump (11,000 tons) and South Korean President Moon Jae-in (11,000 tons). Online travel agent FromAtoB requested data from the 20 biggest economies on Earth in 2018 and received numbers from 15. The ten world leaders producing the most CO² are listed in the chart. Out of the 15 world leaders for whom data was available, the Spanish prime ministers (Mariano Rajoy up to June and Pedro Sánchez from June onwards) had the best track record with 985 tons of CO² emitted [link in German]. The Spanish leaders still managed the lowest carbon emissions, despite the fact that they travelled more than Trump (130,000 km) and Moon (164,000 km). The Spanish government mostly uses the airplane model Falcon 900, which is far smaller than the Boeing and Airbus planes used by other countries, which are the size of commercial airliners. Theresa May, Mark Rutte (Netherlands) and Michel Temer (who was the president of Brazil in 2018) all used smaller planes and found themselves at the bottom of the ranking. 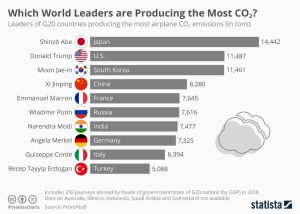