Their top gripe is the rising prices

Six in ten travellers said that technology caused issues while traveling, according to Snow Software. Travelers in Asia Pacific, Europe, and the United States said that particular instances of tech mishaps include, missing a flight due to an incorrect booking or system outage, changing gates without being notified, being unable to access a ticket or itinerary, not being able to get into a hotel room, and/or travellers being impacted by a vendor’s data breach.

Most of those issues deal with problems that arise while on the go. Some travellers still have a bone to pick with booking travel online or on an app, when still at home. Just under half of the respondents said that their number one pain point is that prices keep changing when booking online. An additional four in ten travellers found that travel sites or apps are confusing or slow. When respondents were asked if they had ever experienced technical issues while traveling, about a quarter of people said that they had experienced a website or app crashing when trying to book something. 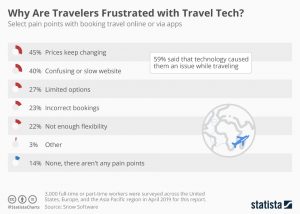