Their answers to the audience questions

For 25 years now, Friends has been there for you when the rain starts to pour and you need to spend a few hours curled up in front of the television. The beloved sitcom officially celebrates its silver anniversary on 22 September, and the planned festivities include a theatrical release of select episodes (in America), a coffee-tastic Lego set and a pop-up recreation of iconic sets.

The Tribeca TV Festival got in on the celebration as well, organizing a 25th anniversary event with Friends creators, Marta Kauffman and David Crane, as well as executive producer and frequent director, Kevin S. Bright. Yahoo was in the audience when the trio took the stage after screening a pair of classic episodes — “The One With the Embryos” and “The One Where Everybody Finds Out” — and shared behind-the-scenes stories from Friends’s decade-long run.

The one where Chandler and Monica never ended up together 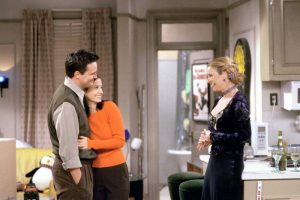 Here’s one reason to miss the days when almost all network comedies were taped in front of a live studio audience: it’s thanks to them that Chandler Bing and Monica Geller (Matthew Perry and Courteney Cox) walked down the aisle and into TV history as one of the best-ever sitcom couples. Crane and Kauffman revealed that they never intended the two to reach a happily ever after ending — a path that started in the Season 4 finale when the unlikely couple ended up in bed together after a hard day’s night of drinking during Ross’s problem-plagued London wedding. “When we started writing it, we never intended [for Monica and Chandler] to end up in a love relationship,” Kaufman said. “We thought it was going to be one of those stupid things they did one night, and the fun that we could have with the awkwardness between them and how that would affect their friendship.”