It is arguably one of the most coveted prizes in Syria’s civil war, and after eight years of fighting, Syrian President Bashar Assad has got it back.

The Damascus-Aleppo highway, or the M5, is known to Syrians simply as the “International Road.” Cutting through Syria’s major cities, the motorway is key to who controls the country.

Assad gradually lost control over the M5 from 2012, when various rebel groups fighting to topple him began seizing parts of the country.

Protests against his family’s rule had erupted the year before amid a wave of uprisings in the Arab world. This soon turned into a civil war, following a brutal government crackdown on dissent and the intervention of foreign powers in the growing conflict. 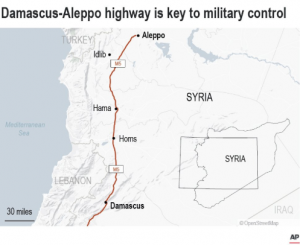 Historically a bustling trade route, one Syrian analyst, Taleb Ibrahim, called the M5 “the most basic and strategic highway in the Middle East.”

For the Turkey-backed rebels fighting Assad, the highway was a cornerstone in holding together their territory and keeping government forces at bay. Its loss marks a mortal blow for opposition fighters whose hold on their last patches of ground in northwestern Syria is looking more and more precarious.