Singer Lana Dele Ray on board….

Witches vs. Christians: it’s a rivalry that dates back centuries, spanning from King Arthur’s court to Salem, Massachusetts. And now the latest battle between the two will begin this Friday night, over President Donald Trump’s soul.
At midnight on February 24th, witches around the gathered to cast a binding spell on Trump “and all who abet him” to stunt his power to do damage. And the Christian Nationalist Alliance, a right-wing group that believes America to be a Christian nation “founded by Christian men upon Christian tenets,” will try to out-magic the witches with a day of prayer. Over candles and a Tower tarot card (representing “the end,” “destruction,” and “having plans disrupted” – and also perhaps a nod to the president’s signature building), participants are to called on spirits to “Bind [Trump] so that he shall not […] fill our minds with hate, confusion, fear, or despair,” among other things.
The spell will be cast on every following waning moon (symbolic of something diminishing, weakening, or disappearing) until Trump leaves office. The words of the spell include a plea to the Wiccan deities to “bind Donald J Trump, so that his malignant works may fail utterly” and so that he “shall not break our polity, usurp our liberty, or fill our minds with hate, confusion, fear, or despair”.
Mr Trump’s supporters don’t escape either, as the spell asks that their “malicious tongues” be curbed too.
Apparently Lana Del Ray is on board, according a cryptic tweet the singer sent out on Thursday. The particular kind of spell called for here, known as a binding spell, is specifically focused on preventing the subject from doing harm to others – as opposed to a hex, which calls for harm to come to the subject, in particular. A Facebook group devoted to the ritual has attracted over 10,500 likes, and coined the hashtag #magicresistance.
The development has sparked fury among Christian conservatives, who have accused the witches of “declaring spiritual war”. 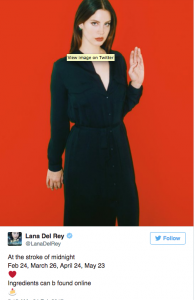 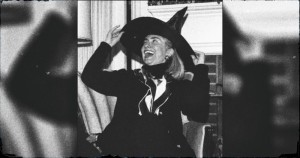 Is this the doing of Hillary…….