The woman dubbed ‘the heaviest in the world’, has died in a hospital in the United Arab Emirates aged 37.
Eman Ahmed Abd El Aty, from Alexandria, Egypt, once weighed almost 500kg, and before her surgery earlier this year had not left her bed since her pre-teens.
Doctors at Burjeel Hospital in Abu Dhabi said Miss Ahmed Abd El Aty had died due to complications from her weight, including heart disease and kidney dysfunction.
The hospital said: ‘Our prayers and heartfelt condolences go out to her family.’
Doctors blamed her weight on a thyroid condition, while her family claimed she suffered from elephantitis, a parasitic infection which causes extreme swelling in a person’s limbs and arms.
Her family has said that she has been heavy all her life, even as a baby. By the time she was 11 she was too heavy to walk, and had to crawl to get around.
Not long after, she suffered a cerebral stroke, which left her bedridden, causing her to pile on the pounds.
After a desperate plea for help, a doctor in Mumbai offered to take on her case free of charge.
In March Miss Ahmed Abd El Aty was flown Mumbai  on a modified plane designed to deal with her sizeable 500kg frame.
After first losing more than 220 pounds in order to fit onto the operating table, she successfully underwent a gastric sleeve surgery and was reported in April to have lost 250kg – more than half of her bodyweight.
Miss Ahmed Abd El Aty arrived in the UAE in May, receiving care from a team of 20 doctors at Burjeel Hospital.
The plan was for her to be monitored and receive physiotherapy to try to help her regain use of her limbs, however she died shortly after 4.30am on Monday morning. 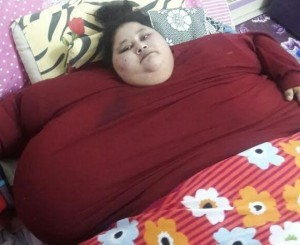 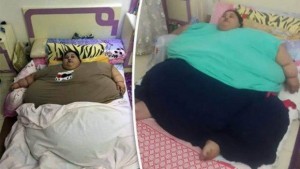 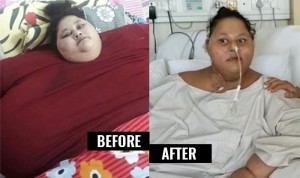