A true and moving story of chivalry

Truly touching moments of humanity, ethics and morals are rather rare in warfare. The Christmas Truce of WWI was an excellent example of such humanity, as were the heroic actions of German Luftwaffe fighter pilot Franz Stigler on December 20th, 1943. His actions got nine men home for Christmas.

Charlie Brown of the USAAF was a Lt. flying his first mission as an aircraft commander flying a B-17, “Ye Olde Pub” on a bombing run over Bremen.

Brown’s bomber occupied the especially dangerous left of the formation, sometimes called the Purple Heart Corner. Bremen was defended by a large contingent of fighters and well-manned flak guns.

Two B-17s were quickly struck by heavy flak, and many went down. Brown’s bomber was hit at least once in the left wing. The crew had to shut down an engine which took them out of the formation. Soon they were met by about eight enemy fighters.

The B-17 was sometimes referred to as the flying porcupine and Ye Olde Pub sure lived up to The name. the gunners took out at least one of the fighters and as many as three, all on their own.

The remaining fighters were still able to take the fight to the bomber, however, and bullets tore through Ye Olde Pub. 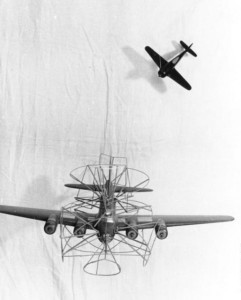 The electrical, hydraulic and oxygen systems were damaged. Brown was wounded in the shoulder, and the seriously wounded had little reprieve as the morphine syringes were frozen.

Oxygen deprivation and wounds caused Brown to black out momentarily as the bomber spiraled towards the earth. Brown woke up and said that his first memory was of dodging trees.

The wounds and lack of oxygen made his memory hazy, but from the severe damage and drop in altitude, it is assumed that the German fighters figured that their target was destined to crash. 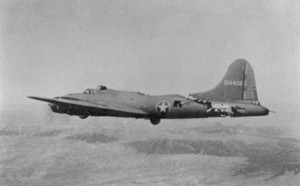 (Brown’s B-17 was even more damaged than this one; the B-17 pictured was able to land with all their crew alive)

Brown was able to get some altitude just as German pilot Franz Stigler was refueling. Stigler saw the bomber and quickly flew up to get above and behind it.

Stigler was a veteran pilot who would eventually serve over 400 combat missions in nearly every front of the war. Flying the Me 109, Stigler was one bomber kill away from earning the high honor of the Knight’s Cross.

Stigler observed the bomber, waiting for the tail gunner to raise his guns. Seeing the limp rear guns, he moved closer and saw the massive amount of damage.

Bullet holes were present all over the aircraft. Stigler knew that most of the men had to be badly wounded. Taking a risk, considering the guns could fire at any time, Stigler flew up to be next to the cockpit.

Stigler and Brown looked at each other, Brown saying he closed his eyes and hoped for his nightmare to be over. Stigler hoped to persuade Brown to land, and failing that, fly to Sweden.

Brown was having none of that, his wounded body and oxygen starved brain only focusing on getting back to England.

Stigler had no way to give Brown verbal commands, only gesturing towards Brown. Seeing that the bomber was heading towards England, Stigler had every opportunity to shoot them down.

Instead, he escorted the bomber over the open waters. Stigler had no way of knowing if enemy escort fighters were on the way but still escorted Brown over the channel.

He wisely turned back before he came too close to England, though not before giving Brown a salute.

Stigler would never speak of his actions during the war. Had he done so he fully believed that a court-martial would follow.

B-17s were hated by the Germans, they dropped massive amounts of bombs and often took out several enemy fighters with their array of guns. Stigler’s humanity could be appreciated but likely not during the war.

About 30-40 years later Brown was living in the United States after a long career and Stigler had moved to Canada after years of service with Germany during and after the war.

Brown had a very hazy memory of the incident and was encouraged to find the German who saluted him to fill in the rest of the memory and make sure it wasn’t a dream or hallucination.

After writing to German pilot newsletters, he finally received word back from the pilot who spared his life.

After a lengthy phone call where Stigler filled in the blanks of the story and proved he was the right one, the two met in person. They hit it off splendidly and have been friends ever since.

This film was taken when Bf-109 ace Franz Stigler met B-17 pilot Charlie Brown for the first time since their encounter during WWII!

The complete story of Franz and Charlie can be read in the international bestselling book, “A Higher Call” available in bookstores worldwide.