The Greek Prime Minister Kyriakos Mitsotakis visited the facilities of COSCO in Piraeus together with the Chinese President Xi Jinping, accompanied by their wives Mareva Grabowski-Mitsotakis and Peng Liyuan respectively.

The two leaders were warmly welcomed to the offices by company workers holding flags of the two countries, as well as by Cosco President Xu Lirong. 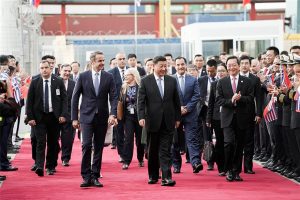 Following Mr Mitsotakis’ closed dinner with the Chinese President, the two leaders went to COSCO, which is the flagship Chinese investments in our country, accompanied by a large delegation. The aim is to look closely at the operation of the investment and consider its further development. 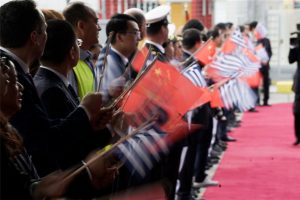 Mrs Mitsotakis and Jinping attended speeches by Minister of Maritime and Island Policy Yiannis Plakiotakis and President of Cosco Xu Lirong, in which they emphasized the successful cooperation of both sides and the goal of further enhancing the port.

Mr Mitsotakis and Jinping had the opportunity to discuss with four Greek employees the subject of their work.

Earlier, in their joint statements, Mr Mitsotakis had stressed that China and Greece share a common goal of making Piraeus port the largest of the Mediterranean and Europe. 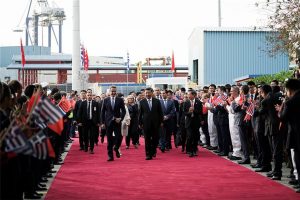 Joint Declaration between Greece and China

Earlier, at the meeting of PM Mitsotakis and President Xi, the two sides came to an agreement on a number of issues. The agreement is described in a joint declaration, aimed at enhancing integrated strategic cooperation.

Among other things, the two sides pledged to enhance co-operation between the two countries.

“Greece reaffirmed its commitment to the principle of ‘one China’, its respect for China’s sovereignty and territorial integrity, and its support for a united China. China has acknowledged Greece’s constructive role in promoting stability, security and prosperity in Southeast Europe, the Mediterranean and the Balkans. “ 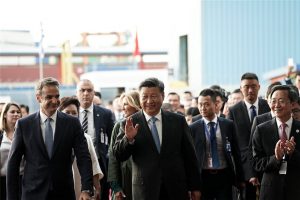 The two countries have indicated their willingness to further develop maritime partnerships, promote extroversion and participation. The two sides are also keen to encourage and support European and Chinese airlines to launch more flights between Greece and China.