A major defeat for the traditional parties, especially for the Socialists

President Emmanuel Macron’s party won an impressive victory, crushing France’s main traditional parties in parliamentary elections, and securing a huge majority to push forward its business reforms, as the results of the first round showed yesterday.

The elections made another crushing blow to the Socialist Party as well as to the conservative parties that alternated in power for decades until the election of Macron in May overturned the traditional division between left and right.

With 100% of the votes cast, the formation of Macron La Republique en Marche (REM) and its MODEM centrist allies won 32,32% of the votes, according to the results released by the Interior Ministry.

Abstinence marked a record for parliamentary elections in France, with the participation reaching barely the 48,6%.

Now it seems that Macron will have all that he needs to pass the reforms he wants but still, after one month from his election as President of France, has yet to clearly describe… 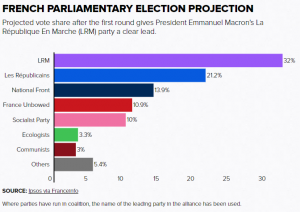