Google Doodle honours the 44th anniversary of the Arecibo Message

The Arecibo Message, sent from the Arecibo Observatory in Puerto Rico in 1974, is a three-minute message of exactly 1,679 binary digits – which, if arranged in a specific way, can explain basic information about humanity and earth to extraterrestrial beings.

Scientists sent the message via frequency modulated radio waves to a cluster of stars 25,000 light years away to demonstrate the power of the Arecibo radio telescope, which was the largest and most powerful in the world at the time.

“It was a strictly symbolic event, to show that we could do it,” Cornell University professor of astronomy Donald Campbell recalled of the momentous event. 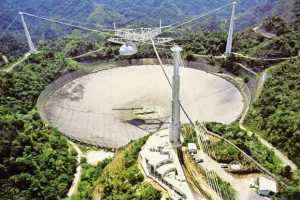 The event moved some present to tears as researchers contemplated their own existence and knowledge of planets and solar systems.

The hope is that, in many thousands of years, it may reach another living being.

The actual message was devised by a team of researchers from Cornell University led by astronomer and astrophysicist Dr Frank Drake.

When received, the message could be arranged in a grid 73 rows by 23 columns to form a pictograph that represents facts about mathematics, human DNA, planet earth, and humans. 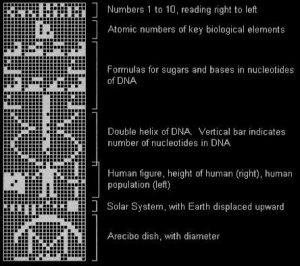 From top down, the seven-part message can show the numbers one to 10, atomic numbers of elements including hydrogen and oxygen, the formulas for the sugars and bases in the nucleotides of DNA, a graphic of the DNA double helix structure, a figure of a human and the population of earth at the time, a graph of the solar system, and a graph of the telescope.

Since the Arecibo message was sent, the message has traveled just 259 trillion miles – a fraction of its journey to its intended destination, which will take roughly 25,000 years to complete.