Tweets from the account of George Michael’s last boyfriend, Fadi Fawaz – who found the singer deceased in his bed – have alleged that Michael killed himself.
The series of typo-riddled posts appeared January 1 on Twitter. A few minutes later, Fawaz’ Twitter site was deleted. Michael’s publicist has said the singer died from a heart attack. However, Michael’s autopsy was inconclusive and more tests are being performed. Fawaz previously told CNN that the couple was supposed to go to Christmas lunch, and he found Michael, 53, dead in bed.

Early on January 1, the Twitter page of Fawaz, Michael’s final relationship, alleged, “the only thing George wanted is to DIE.”
The next post said, “he tired (sic) numbers of time to kill himself many times…”
And then: “and finally he managed…”
Fawaz, a fine art photographer who had changed his profile picture to one of himself with Michael, added, “we loved each other very much and we were together almost 24 hours a day..”
Although Fawaz’ account was quickly deleted, some people had already seen the posts and grew concerned. 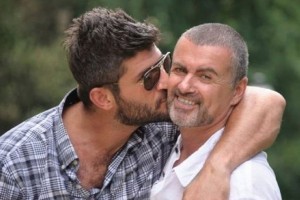 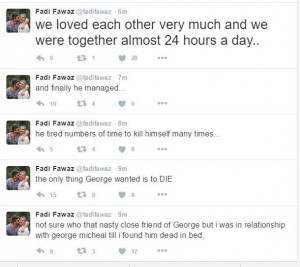