Who is the new haggler of Greek debt?

Euclid Tsakalotos – the Oxford-educated economist who is Greece’s new face in negotiations with international creditors –  was born in the Netherlands in 1960, and is soft-spoken and amiable. He speaks Greek tinged with a faint British accent and is less about fashion style and more about method, organization and detail.

He was raised in the UK from 1965-1993 where he attended St. Paul’s private school in London before studying Business and Political Science at Oxford University and the University of Sussex. At uni, he was active at the student wing of Greece’s euro communist party that was against globalization..

For four years he taught at the University of Kent. He has lived in Greece since 1993. He has written many books. He was a candidate for the prefecture of Preveza and elected a member of the SYRIZA central committee in December 2004.

These days he supports eurozone membership but is against the implementation of further recessionary measures. The polar opposite of Finance Minister Yanis Varoufakis, it is rumored that Tsakalotos prefered to be an economist in the Foreign Ministry rather than Finance with the sidelined rock star minister at the helm. 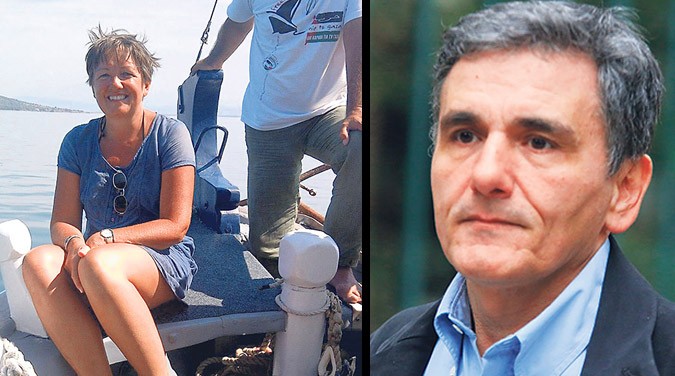 His wife is British economist Heather D. Gibson whose CV rivals that of her husband. She is an economist with a plethora of publications to her name, such as one published for the Bank of Greece on the Greek fiscal crisis in 2011.

Friends say that the couple is well-matched. They speak English with each other and have few, select friends. Heather supports her husband and it was actually her suggestion that he enter politics.

The couple lives in Kifissia, but they often visit Preveza where they own a holiday house.