Noted US-based Indian economist Ashoka Mody, the IMF’s former chief of mission to Ireland during the latter’s bailout, took his former employer to task for its Greek programme, essentially saying that the organization merely participated in a scheme to guarantee German and French banks’ exposure in Greece onto institutional lenders. He refers to a “fateful mistake” back in 2010, saying a default affecting private creditors would have been preferable. His commentary was posted on the BloombergView website: 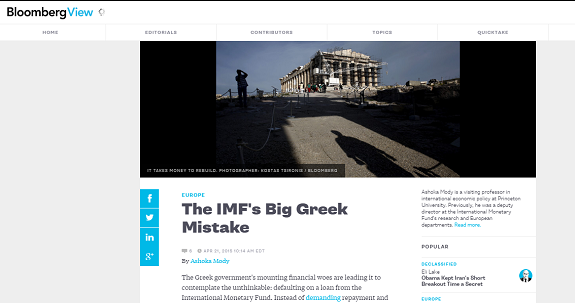 “The Greek government’s mounting financial woes are leading it to contemplate the unthinkable: defaulting on a loan from the International Monetary Fund. Instead of demanding repayment and further austerity, the IMF should recognize its responsibility for the country’s predicament and forgive much of the debt. Greece’s onerous obligations to the IMF, the European Central Bank and European governments can be traced back to April 2010, when they made a fateful mistake. Instead of allowing Greece to default on its insurmountable debts to private creditors, they chose to lend it the money to pay in full. At the time, many called for immediately restructuring privately held debt, thus imposing losses on the banks and investors who had lent money to Greece. Among them were several members of the IMF’s board and Karl Otto Pohl, a former president of the Bundesbank and a key architect of the euro. The IMF and European authorities responded that restructuring would cause global financial mayhem. As Pohl candidly noted, that was merely a cover for bailing out German and French banks, which had been among the largest enablers of Greek profligacy. Ultimately, the authorities’ approach merely replaced one problem with another: IMF and official European loans were used to repay private creditors. Thus, despite a belated restructuring in 2012, Greece’s obligations remain unbearable — only now they are owed almost entirely to official creditors. Five years after the crisis started, government debt has jumped from 130 percent of gross domestic product to almost 180 percent. Meanwhile, a deep economic slump and deflation have severely impaired the government’s ability to repay. Almost everyone now agrees that pushing Greece to pay its private creditors was a bad idea. The required fiscal austerity was simply too great, causing the economy to collapse. The IMF acknowledged the error in a 2013 report on Greece. In a recent staff paper, the fund said that when a crisis threatens to spread, it should seek a collective global solution rather than forcing the distressed economy to bear the entire burden. The IMF’s chief economist, Olivier Blanchard, has warned that more austerity will crush growth. Oddly, the IMF’s proposed way forward for Greece remains unchanged: Borrow more money (this time from the European authorities) to repay one group of creditors (the IMF) and stay focused on austerity. The fund’s latest projections assume that the government’s budget surplus (other than interest payments) will reach 4.5 percent of GDP, a level of belt-tightening that few governments have ever sustained for any significant period of time. Following Germany’s lead, IMF officials have placed their faith in so-called structural reforms — changes in labor and other markets that are supposed to improve the Greek economy’s longer-term growth potential. They should know better. The fund’s latest World Economic Outlook throws cold water on the notion that such reforms will address the Greek debt problem in a reliable and timely manner. The most valuable measures encourage research and development and help spur high-technology sectors. All this is to the good, but such gains are irrelevant for the next five years. The priority must be to prevent Greece from sinking deeper into a debt-deflation spiral. Unfortunately, some reforms will actually accelerate the spiral by weakening demand. On April 9, Greece repaid 450 million euros ($480 million) to the IMF, and must pay another 2 billion in May and June. The IMF’s managing director, Christine Lagarde, has made clear that delays in repayments will not be tolerated. “I would, certainly for myself, not support it,”she told Bloomberg Television. Inevitably, debt relief will be provided — but in driblets and together with unrelenting pain. The Greek government will need to withhold payments to suppliers and workers, and will raid pension funds. Five years from now, the country’s economic and social stress could well be even more acute. The question will be: Why was more debt not forgiven earlier? No one is willing to confront that unpleasant arithmetic, and wishful thinking prevails. Having failed its first Greek test, the IMF risks doing so again. It remains trapped by the priorities of shareholders, including in recent years the U.K. and Germany. To reassert its independence and redeem its lost credibility, it should write off a big chunk of Greece’s debt and force its wealthy shareholders to bear the losses.”