Eretria is an ancient Greek city-state located in the southern part of Euboea, a Greek island facing the coast of Attica. Eretria is said to have been founded during the 8th century BC and was one of the Greek city states that played an important role in the Greek colonization movement, which lasted from the 8th to the 6th centuries BC.

At the beginning of the 5th century BC, Eretria was destroyed and its population deported by the Achaemenid ruler, Darius I the Great, as punishment for their involvement in the Ionian Revolt . The Persians did not succeed in turning Greece into one of their satrapies and Eretria fell under the dominion of Athens after the Graeco-Persian Wars. 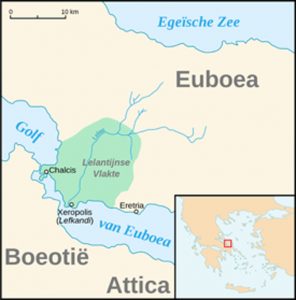 During the 4th century BC, Eretria became a part of the Greek Empire of Macedonia, before falling to the Roman Republic during the 2nd century BC. Eretria was destroyed during the First Mithridatic War and gradually fell into decline after that. The city was eventually abandoned and the present town was only recently founded during the 19th century.