You could buy a brand new car with that money!

The average cost of changing oil for your car could range between $20-70. That, of course, applies to the 99.99% of the population, because if you belong to the tiny 0.01 percentile and own a Bugatti Veyron you will have to splash out over $20,000! Here’s why it costs that much.

Royalty Exotic Cars, a company that specializes in renting out high-end supercars, made a pretty thorough video explaining why an oil change on a Bugatti Veyron costs as much as it does. While some of it certainly involves badge cachet, a lot of it comes down to how damn complex the car is — as it should be, given its seven-figure price tag.

The Veyron uses a dry-sump oiling system with 16 different drain plugs, accessible after removing parts of the underbody. Refilling, along with checking air filters and all that good stuff, requires removing the car’s rear fender liners and rear deck. Guess how many bolts are holding those pieces on? Too many, that’s how many. 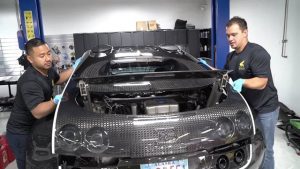 If you have Bugatti money, dropping 21 large on a fluid change might seem appropriate, but it’s still pretty inflated. $21,000 is about 1.4 percent of the base Veyron’s $1.5 million price tag. Applying that same percentage to a $20,000 new car would result in a fluid change cost of $280, which is sort of high. Then again, technicians don’t need to disassemble half of your Hyundai Elantra to get all the oil out. Either way, it’s not like you’re going to do it all yourself.