The Prime Minister Kyriakos Mitsotakis proceeded with the assessment that the program “Antonis Tritsis” for actions and projects worth 2.5 billion in municipalities across the country will create 40,000 new jobs.

The Prime Minister stressed that “the planning of the program prioritizes the concept of justice”, explaining that “in this program, all Local Government Organizations must have a share”.

“The procedures will be done digitally, the projects will be monitored by a special service”, added Mr. Mitsotakis.

As the Prime Minister stressed, “the program is a political initiative of trust in the elected local authorities as they will undertake to formulate actions in a way that fruitfully complements the wider regions and is in line with the national strategy”.

Giving an example of the scope of the project, Mr. Mitsotakis referred to the largest project for which an application has been submitted and concerns the construction of the southern aqueduct of Rhodes and one of the smallest projects the water supply works in Pogoni.

According to the Prime Minister, the interventions can reach up to 5,000, noting that the three words that characterize the “Antonis Tritsis” program are “flexibility, perspective, innovation” and his goals are “development, environment, social cohesion” with tools ” digital convergence, improving quality of life and social cohesion”. 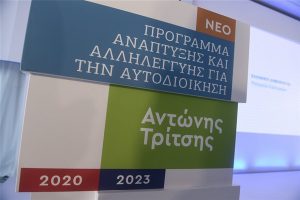 As the Prime Minister noted, the 2.5 billion action plan is “a plan with the virtues of the politician from whom it took its name. It is bold and costly, it spreads everywhere, adapting the local needs to the national screenings and it looks forward to many new jobs everywhere in Greece but also for a better quality of life “.

He explained that his presence at the event was also intended to honor the people of the local government “100 days after the first attack of the pandemic but having taken satisfaction that we emerged victorious from this first battle”.

“The perception and practice of governance is changing, we trust the local government of first and second degree as promised before the elections. Local government is not a hostage and a follower but a friend of the central government. I am completely indifferent to the party origin of the municipal authority, I am interested in his passion and love for his place”.

In closing, he stressed that “30 years ago, as a candidate for mayor, Antonis Tritsis presented his program with the aim of establishing a municipal development fund to upgrade the life of the city and its citizens. This is what we are doing now, embracing all of Greece. This new municipality was 30 years late, but now it’s here to stay”.