The winning photo, “Face to Face in a River in Borneo,” was shot when Bojan was photographing orangutans in the Tanjung Puting National Park

Standing in five feet of crocodile-infested water could very well have been photographer Jayaprakash Joghee Bojan’s favorite moment of 2017. That’s because the resulting shot of a shy orangutan has earned the Singapore native the 2017 National Geographic Nature Photographer of the Year. Nat Geo recently shared the winning photos of the annual contest, along with the top images in categories for landscapes, underwater, and aerials.

The winning photo, “Face to Face in a River in Borneo,” was shot when Bojan was photographing orangutans in the Tanjung Puting National Park, a multiday project that meant living in a houseboat. While there, the photographer heard of an orangutan with some unusual behavior — crossing the river. Bojan decided to spend some time by the river to see if he could spot the swimming primate. After waiting a full day and a night, his patience was rewarded when a ranger spotted the primate further down the river.

Rather than risk scaring off the animal, Bojan hopped into the Sekoyner River at a spot about five feet deep. The river is also said to be home to some freshwater crocodiles, but Bojan just focused on the orangutan. The orangutan hid from the photographer behind a tree — and Bojan captured the winning shot when he peeked out from the side of the tree. 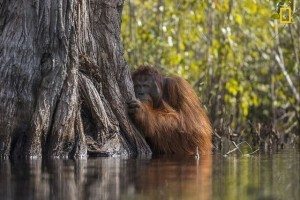 For the winning shot, Bojan received $10,000 and publication in National Geographic’s magazine and Instagram.