Greece and Israel are “natural allies,” Prime Minister Kyriakos Mitsotakis said in an interview with Yedioth Ahronoth newspaper a few hours before his meeting with his Israeli counterpart Benjamin Netanyahu on his first visit to a foreign country since the start of the pandemic.

“Relations between countries are based on historical ties of decades or even centuries. The strong relationship between the peoples of Greece and Israel is based on mutual respect, culture and shared visions. Therefore, this is a stable bond that goes beyond politics,” the prime minister said. 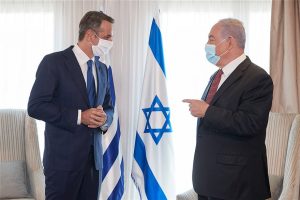 He also pointed out that there are “huge opportunities for coordinated action” between the two countries in many areas, such as investment, defence and innovation.

On tourism, Mitsotakis stressed that the Greek summer remains an exciting experience and is accompanied by safety, which is a top priority for our country. “My concern is for Greece to become the safest destination in Europe,” he said, adding that from July 1, Greece will open its borders to most non-European countries. 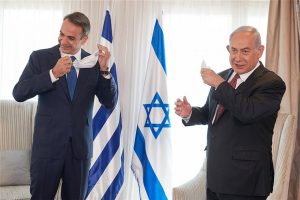 Referring to Turkey’s behaviour in the region, Mitsotakis described as “unacceptable” Ankara’s statement that it wants to have a say in every decision taken, stressing that he expects the neighbouring country to abandon its neo-Ottoman delusions.

Greek PM: After our win against the virus, Greece is picking up the growth thread

He reiterated that the tripartite cooperation schemes that have been developed in the Eastern Mediterranean, with the participation of Greece, are not directed against any country and are open to all, provided they adhere to international law and good neighbourliness. 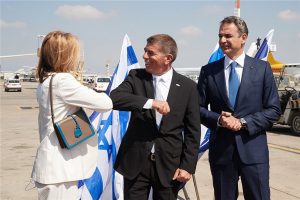 Foreign Minster Nikos Dendias is currently holding a meeting in private with his Israeli counterpart Gabi Ashkenazi in the context of Prime Minister Kyriakos Mitsotakis’ visit to Israel.

Moreover, Dendias will attend a working dinner with Ashkenazi at 20:00 on Tuesday at the Waldorf Astoria Jerusalem hotel.