The former president of the Mycenaean Foundation Dr. Malcolm H. Wiener, a prominent member of the international archaeological community, with very important excavation work in our country, was recently elected an associate member of the Academy of Athens, honouring his scientific and philanthropic activities.
An eminent Aegean archaeologist (especially in the subjects of Archaeometry and Palaeoclimatology), Malcolm H. Wiener is the major sponsor of Greek Archeology having donated over 150 million dollars to hundreds of scholars and excavations of the prehistoric Aegean since 1982.

He is the founder of the Institute of Aegean Prehistory (INSTAP) and of the M.H. Wiener Foundation, former president of the Mycenaean Foundation, a member of the Board of the American School of Classical Studies in Athens of and the Metropolitan Museum in New York, an honorary professor of seven international universities (including the University of Athens and Dickinson College), a member of seven Academies and many other research institutes and academic institutions around the world. 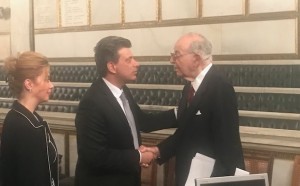 Mr Wiener’s latest activities in Greece involve his support to the effort of upgrading and equipping the Mycenaean Foundation, a goal he is pursuing in close and excellent collaboration with the current President and professor of Archaeology at Dickinson College, USA, Christofilis Maggidis. 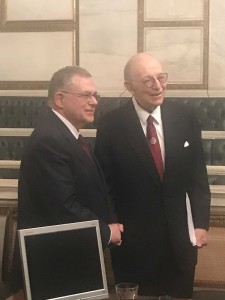 It should be noted that Mr. Wiener contributed to the study of the ancient sealing stone found in the grave of Warpiti’s Grip in Pylos, next to the Mycenaean palace of Nestor. The image that is embossed on the seal, a stunning representation of the battle between three warriors, is portrayed in a very detailed way and some of its features are almost invisible to the naked eye.
“The impressive battle scene which is depicted on the seal, one of the greatest masterpieces of Mycenaean Art, is similar to some of Michelangelo’s drawings currently being exhibited at the Metropolitan Museum of Art in New York,” Malcolm H. Wiener mentioned in the New York Times, as an expert in the Aegean prehistory.