Adidas announced an ambitious four-year plan called “Own the Game”, which centers around a shift towards a DTC-led business model

While international sportswear giants such as Nike, Adidas and Puma are bitter rivals, they all have one thing in common: they’re trying to cut out the middleman. Just last week, Adidas announced an ambitious four-year plan called “Own the Game”, which centers around a shift towards a DTC-led business model. DTC stands for direct-to-consumer and describes, you guessed it, direct sales to consumers, be it through company-owned retail stores, factory outlets or, most importantly, digital channels.

As part of the new strategy, Adidas aims for its direct-to-consumer business to account for half of its total sales by 2025 and contribute more than 80 percent to the company’s targeted revenue growth until then. “Consumers expect to receive a brand and shopping experience tailored to their preferences, with personalized offerings in both digital and physical spaces,” the company’s official press release reads, adding that the new business will be built around membership, a strategy that both Nike and Adidas have been pursuing aggressively in recent years. By 2025, Adidas aims to triple its members to around 500 million, all while doubling its e-commerce sales to around $10 billion.

While selling directly to consumers has the potential to drive top- and bottom-line growth, it also comes with a new set of challenges, as Adidas’ CFO Harm Ohlmeyer pointed out during the company’s presentation of its new strategy. Whether it’s shipping individual parcels to consumers instead of in bulk to wholesale partners, handling returns or taking full advantage of gained customer insights – running a DTC business efficiently at that scale requires significant investment in marketing and supply chain management.

As the following chart shows, the world’s largest sportswear companies are all moving in the same direction in terms of dealing directly with consumers. With DTC sales accounting for 41 percent of total sales in 2020, Adidas is half a step ahead of its largest competitor Nike, whose direct-to-consumer business accounted for 35 percent of sales in its last completed fiscal year. It needs to be noted though, that Nike’s fiscal year 2020 ended May 31, meaning that the pandemic’s positive effect on DTC sales isn’t fully accounted for in Nike’s results. 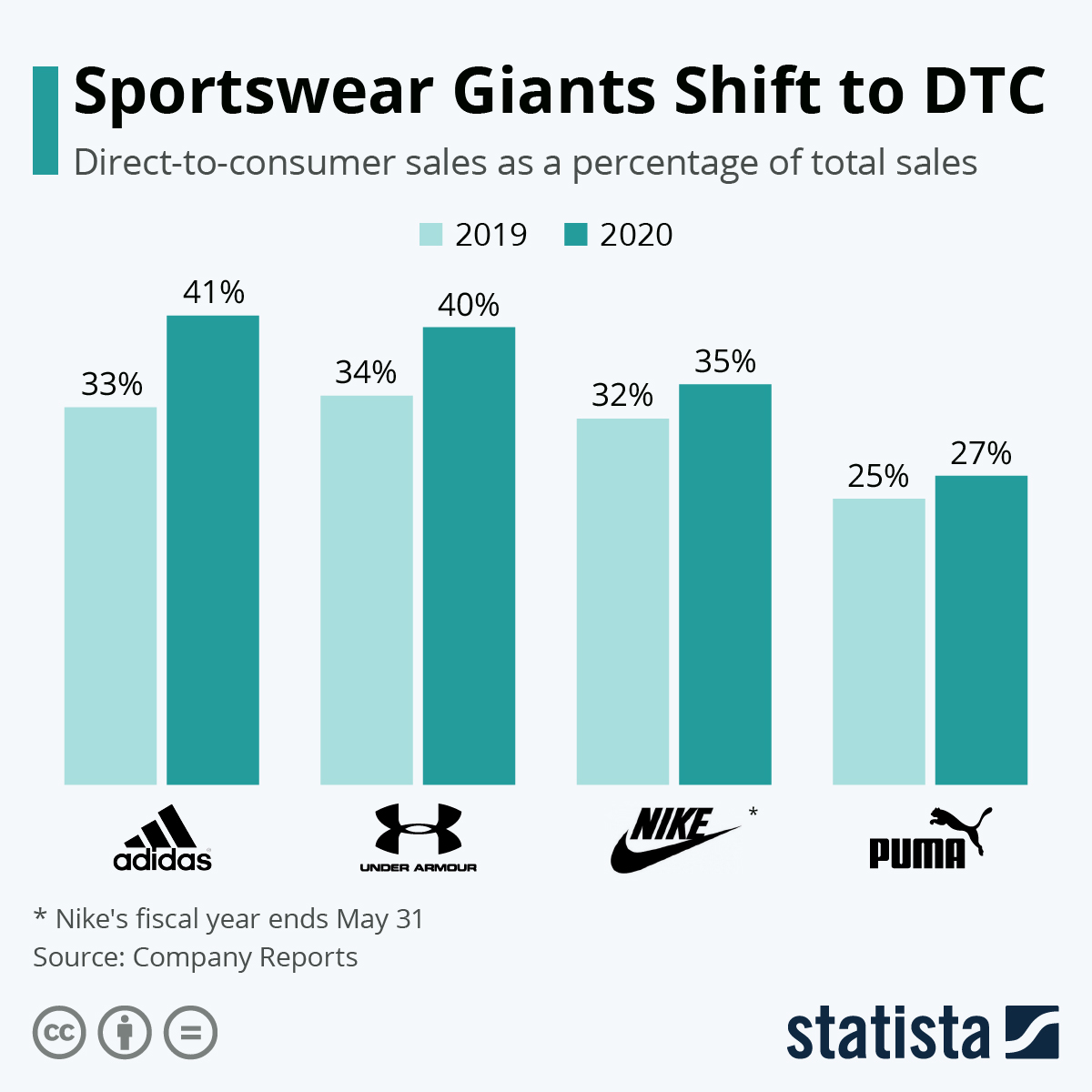