A former Thai navy diver has died while taking part in efforts to rescue 12 boys and their football coach trapped in a flooded cave in Thailand.

Petty Officer Saman Gunan lost consciousness on his way out of the Tham Luang cave complex, where he had been delivering air tanks. 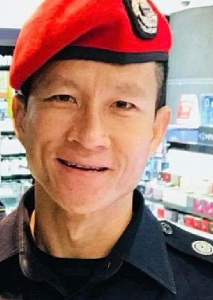 “His job was to deliver oxygen. He did not have enough on his way back,” the Chiang Rai deputy governor said.

PO Saman was brought out by his dive partner but could not be revived.

The oxygen level in the chamber where the boys have taken refuge has fallen to 15%, officials said at a news conference. The usual level is about 21%.

The boys and their coach ventured into the cave while it was dry, but were trapped by a sudden deluge of rainfall. Ten days later British rescue divers found them perched on a rock shelf about 4km (2.5 miles) from the cave mouth. 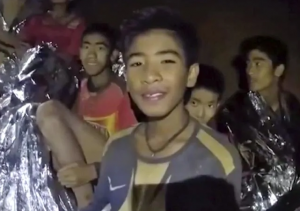 A death in the cave

PO Saman, who was reportedly 38, had left the navy but returned to aid in the rescue operation. Officials said his funeral would be sponsored by the Thai king.

Said to be an avid runner and cyclist, he was part of the massive rescue operation launched after the group became stranded in the Tham Luang cave. 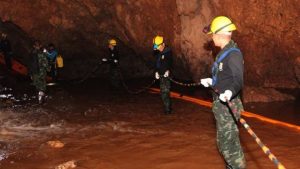 “On the way back from setting up oxygen bottles, Petty Officer First Class Saman Gunan passed out. His buddy tried to give him first aid, but he did not respond. We brought him to chamber three and gave him another round of first aid, but he remained unconscious.” 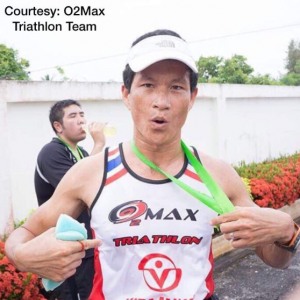 The search operation would go on, he said. “I can guarantee that we will not panic, we will not stop our mission, we will not let the sacrifice of our friend go to waste.”

Around 1,000 people are involved in the rescue operation, including navy divers, military personnel and civilian volunteers. 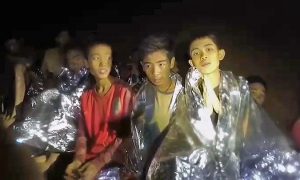 When asked how the group could make it out safely if an experienced diver could not, Rear Adm Arpakorn said they would take more precautions with the children, who are aged between 11 and 16, and their 25-year-old coach.

Do the boys have enough oxygen?

Authorities say there are concerns about falling oxygen levels in the chamber where the boys and their coach are trapped.

Oxygen levels were being depleted by the large number of people working inside the cave network, said Chiang Rai Governor Narongsak Osotthanakorn.

Authorities are now working to get a 5km (3 mile) cable into the cave to supply the group with air. 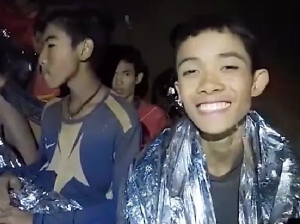 A blow to morale

By Sophie Long in Chiang Rai

Rescue operation leaders here say most of those involved have been trained to work in high risk environments, and to deal with eventualities like this.

They say the death of PO Saman won’t impact on their mission. But there is a different atmosphere today in the makeshift village that’s evolved at the cave’s entrance, and the death of a former navy Seal highlights just how dangerous the route out of the cave remains.

It is unlikely the boys will be told about the death. One of the prime concerns here is to keep them not just physically but mentally strong.

Today, the priority is to connect a fibre optic cable that will allow the boys to speak to their families for the first time in nearly two weeks.

What are the rescue options now? 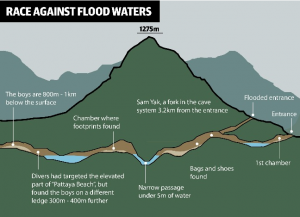 The boys are being regularly supplied with food and medical care, but there are grave concerns over heavy rainfall forecast for Sunday.

Authorities are trying to work out how best to bring the group to safety, with officials stressing they do not intend to take any risks with the boys’ safety. 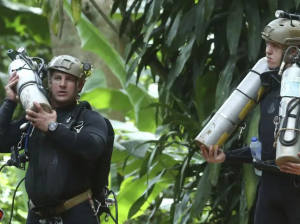 The military has been pumping water out of the cave but if they cannot hold the water level down, they will be left with two stark options – teaching the boys to use diving equipment, or waiting months until the rainy season ends.

Leaving the boys to wait brings with it another danger: that the sinkholes and streams in the hills could flood the chamber completely.

“At first, we thought the children could stay for a long time… but now things have changed, we have a limited time,” Rear Adm Arpakorn warned. 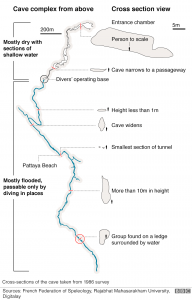