The Trump administration on Tuesday evening published two “Conceptual Maps” of “The State of Israel” and a “Future State of Palestine” as part of the “Peace to Prosperity” plan unveiled by President Donald Trump at the White House alongside Israel’s Prime Minister Benjamin Netanyahu.

Trump said in his speech outlining the plan that both Netanyahu and rival Blue and White leader Benny Gantz had endorsed his vision as a basis for negotiations. He also said Netanyahu had authorized the release of the maps. 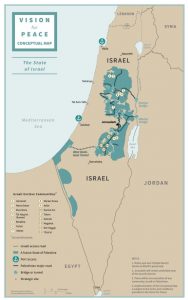 The maps show Israel, the West Bank and Gaza Strip as a single unit, a series of numbered “Israeli enclave communities” in what is today the West Bank, territories marked as set aside for “a future State of Palestine,” a West Bank-Gaza tunnel, access roads, strategic sites and other features.