Greek warships are sailing near the ship

The Turkish survey vessel Oruc Reis has entered 20 nautical miles into the Greek continental shelf for the past few hours. The research ship, which has laid cables is being accompanied by two other boats, the Ataman and Cengiz Han, and has opened its transmitter as shown on the website marinetraffi.com.

A number of Greek warships are sailing near the area. A message from the Greek ships is being transmitted at a constant 15-minute interval to the captain of the Oruc Reis and its crew informing them they have entered the Greek continental shelf and urging him to leave the area.

According to informed sources, due to the noise caused in the area by the large concentration of warships, the crew of Oruc Reis can not conduct investigations.

Government sources say that Greece is moving calmly and decisively, pointing out that the Oruc Reis can not proceed with surveys due to the noise made by the boats that accompany it, and therefore it may be a show of force by Turkey.

The Oruc Reis is accompanied by seven Turkish frigates which have been deployed nearby, creating a protective barrier. According to information, the Turkish research vessel has moved for a few nautical miles within the Greek continental shelf, constantly performing maneuvers which show that its intentions are to carry out a continuous “hide and seek” game between the Greek and Turkish EEZ.

Meanwhile, Turkish media are releasing images of the Oruc Reis escorted by warships in a clear operation of psychological warfare. 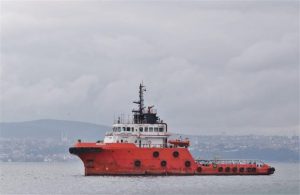