An unlooted chamber tomb containing, among others, a coffin with a well-preserved skeleton of an adult in a flexed position, as well as vessels in an excellent state of preservation, were excavated in the area of Ierapetra by the Lassithi Ephorate of Antiquities. 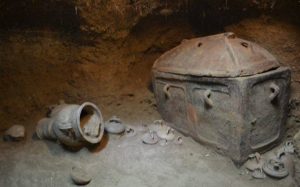 According to a statement from the Culture Ministry, the tomb was found during a salvage excavation conducted in an olive grove located at Rousses, about 800 meters northeast of the village of Kentri, Ierapetra. A pit with a diameter of 1.20 meters and a depth of more than 2.5 meters was excavated in the grove after which “a chamber tomb was discovered, dug into the soft limestone of the area. The access to the tomb was made by a vertical trench, while the entrance was sealed by stone masonry.”

The interior of the tomb was divided into three carved niches, according to the ministry. An intact coffin with the cover in place was found in the most southern one. The well-preserved skeleton was found inside. 14 ritual amphorae, an amphorae crater with an inherited fact and a bowl were found in front of the coffin. 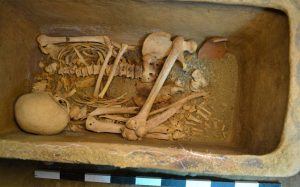 In the northern niche was found another container with another adult skeleton and additional vessels near it. All vases are intact, of good craftsmanship and in an excellent state of preservation.

The announcement said that “according to the ceramic typology, and according to the first estimates, the tomb can be dated to the Late Minoan IIIA-B period, approximately from 1400 to 1200 BC.”