Antifa activists could be jailed for up to 15 years for wearing masks under a bill introduced by a US congressman.

If passed, Bill HR 6054 would punish anyone wearing a mask or disguise who “injures, oppresses, threatens, or intimidates” someone else exercising a right guaranteed under the Constitution.
The title of the bill – “Unmasking Antifa Act of 2018” – makes it clear that Antifa activists are its intended target, but the bill’s text never explicitly mentions them. 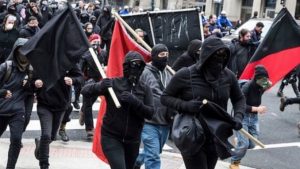 The bill, which was introduced by Republican Rep. Dan Donovan of New York last month, has drawn widespread condemnation from critics who claim it unfairly targets Antifa activists, while it could embolden the far-right demonstrators Antifa protests against.
The term “Antifa,” short for “anti-fascist,” is used to refer to a loose coalition of individuals with extreme left-leaning political views that often fall outside of the mainstream Democratic Party’s platform. 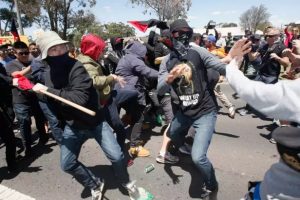 The group has no figurehead or official governing body, but members -some of whom turn to radical or militant tactics to make their views known- generally say they oppose the inequality of wealth by corporations and discrimination against marginalized communities. They often wear black and obscure their faces while protesting.
Source: cnn
Tags With: antifaextreme leftleftistspoliticsunmaskingUS President Donald Trumpusaworld