It brought in $7.4 billion in funding

Some companies brought in stellar funding rounds, grossing over $100 million in a single deal. During the most recent quarter, eight of the top ten of those heavy-hitting companies were in the United States. Despite this, for the first time, the United States made up less than half of all AI startup funding deals. In 2013, about three-quarters of artificial intelligence deals went to companies in the United States. As of this year, that number dropped to 40 percent. International AI startups have been supported in the EU and China by enhanced efforts to expand government AI initiatives. 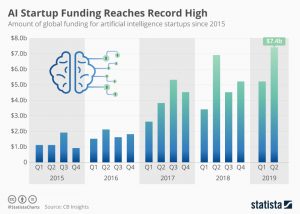