The El Al Boeing 747 had an unusual flight path

A Boeing 747 pilot “drew” an incredible picture in the sky to mark the aircraft’s final journey.

The plane had served Israeli airline El Al for 48 years before making one last special retirement flight from Rome in Italy to Tel Aviv.

The captain at the helm of “Queen of the Skies” made the trip even more memorable by altering the flight path so that it resembled the silhouette of a Boeing aircraft while flying over the Mediterranean Sea.

Complete with symmetrical wings, nose, tail and engines, the jet mapped out by the flight path can be seen on FlightRadar24, and includes an impressive level of precision.

The plane was the last 747 in El Al’s fleet; the airline has been phasing them out in favour of the more efficient Boeing 787-9 Dreamliner.

It’s not the first time an aircraft has been used to create an image. 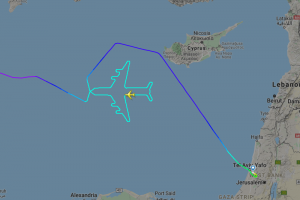 (The El Al Boeing 747 had an unusual flight path)

In 2017, one bold and inspired pilot brought seasonal joy to the world by drawing a giant Christmas tree in the sky on a flight path over Germany while doing a test flight of an Airbus A380 aircraft for Emirates.

The plane set off from Hamburg’s Finkenwerder airport and spent around four hours airborne.

However, instead of simply doing a few laps, the pilot took the decision to use the flight path to introduce a little more festive cheer. The tree even featured baubles by means of regular loops in the flying pattern in between each branch.

Less festive was the US Navy advanced fighter jet that was used to draw a penis in the sky.

The Navy E/A-18 Growler warplane used the condensed air trail from its exhaust to draw the giant phallic image while flying over Okanogan County in Washington state in 2017.

Pictures immediately went viral on social media and the aircrew responsible was grounded.

“Sophomoric and immature antics of a sexual nature have no place in Naval aviation today,” Vice Admiral Mike Shoemaker, the commander of Naval Air Forces, said at the time.