A Turkish ‘black hawk’ military helicopter has landed at Alexandroupoli, northern Greece, after requesting permission from Greek authorities. According to reports, the helicopter, which signalled ‘mayday and alert’ for emergency landing,  was carrying seven military personnel and a civilian, all considered to be supporters of the military coup that was suppressed in Turkey. According to information, the eight passengers and crew asked for political asylum. Two Greek F-16 jet fighters scrambled to escort the aircraft. The Greek police issued a statement saying the eight people were escorted to the Alexandroupoli police station where they officially asked for political asylum from the Greek authorities. The helicopter is being guarded. There are two majors, one captain and five soldiers. Meanwhile, the Turkish Foreign Minister, Mevlut Cavusoglu has requested their extradition to Turkey from the Greek authorities. 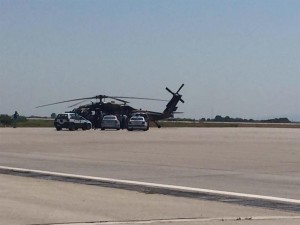