The Greek National Opera promises to make this festive season even more magical for parents and their kids traveling to Athens with two amazing children’s shows that are certain to entertain and delight the whole family.

These are the performances the Greek National Opera (GNO) will be bringing to young audiences before, during and right after the Christmas holidays and the New Year:

This season there is a new children’s opera, titled “Prince Ivan and the Firebird”, commissioned by the GNO’s Alternative Stage from leading composer and director Thodoris Abazis as its inaugural children’s performance at its new facilities at the Stavros Niarchos Foundation Cultural Center.

Aimed at children aged 5 to 12, the opera is based on a well-known traditional Russian tale – that was also the source of inspiration for Igor Stravinsky’s famous ballet – and it is the ideal introduction to the world of opera from a composer well versed in the language of modern music and theater. 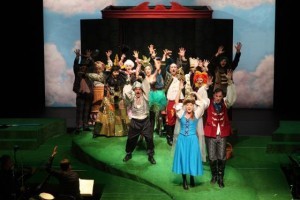 Following the New Year the GNO will also be presenting children’s ballet “The Nutcracker”. Featuring Renato Zanella’s dreamy choreography and fairytale-like sets and costumes designed by Christof Cremer from the Vienna State Opera, Tchaikovsky’s famous ballet will be staged in morning and evening shows aimed at families and schools.