Light into the dark corners of history

Cosmos Philly, a web-site with Greek-American news from Philadelphia, published a small but important analysis that sheds light to the Genocide of the Greeks of Asia Minor by the Ottoman Turks.

It compares it with the Jewish Genocide and it attempts to answer the question, why it is that so few know of the Genocide of the Greeks of Anatolia.

We are all familiar with the mass extermination of Jews during the Second World War. But are we familiar with the extermination of 1.5 million Greeks during the period 1914-1923 in the Ottoman Empire (today’s Turkey)? How can one genocide be so well known, yet another go virtually unnoticed? Genocide has a lasting effect, not only on survivors, but also on their families. It is for that reason that genocide should not go unpunished. Unfortunately for the genocide of the Ottoman Greeks, it has received little recognition, let alone coverage in media and inclusion in school curricula.

Certain cultures have done everything in their power to bring to light the genocide of their people regardless of how long ago it occurred. Take for example the Armenians who were co-victims in genocide along with the Greeks in the Ottoman Empire during the period 1914-1923. The Armenian Genocide is synonymous to many people. A plethora of books are available in English on the Armenian Genocide and subsequently it has been recognized by over 20 countries worldwide. 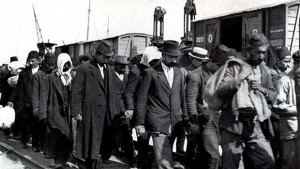 In Australia, we are all familiar with the legend of the ANZACS through the education system. We’ve heard about those brave Aussie soldiers who fought bravely alongside the New Zealanders on the Allies’ side against the Germans and Turks at Gallipoli. The name Gallipoli by the way comes from the Greek ‘Καλλίπολη’ which means ‘good city’. It should be no surprise then, that Gallipoli was inhabited by some 30,000 Greeks prior to the ANZACS landing in April 1915. But when the ANZACS landed, those Greeks had already been eliminated. They were given a few hours notice to vacate their homes. They were placed in steamers and then sent to the interior, to Turkish villages where they were given the choice of Islam or death. Their men were conscripted into the notorious Labour Battalions where most perished due to a lack of food and water. The Greek Genocide had already begun.

But why is the Greek Genocide so unknown to most? Let’s for one moment compare it to the Jewish Holocaust, a genocide most are familiar with. In doing so, we will be able to see that the genocide of the Greeks of the former Ottoman Empire, had many similarities with the Jewish Holocaust which was to happen some 20 years later (1933-1945).There are at least 14 similarities between the two genocides in question. It should be noted that in 2007, the Greek Genocide was formally recognised by one of the foremost groups of genocide scholars, the International Association of Genocide Scholars (IAGS). It is however unrecognised by nations worldwide, including Australia. 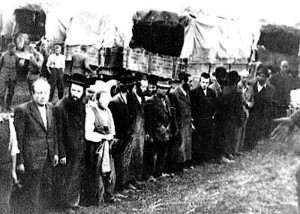 The following are the most obvious similarities between the Jewish Holocaust and the Greek Genocide:

1. Timing: As mentioned above, both genocides occurred around the time of a world war. This allowed the mass slaughter to happen while the world’s attention was focussed on the war itself. Both genocides were perpetrated over several years; the Holocaust over 12 years (1933-1945) and the Greek Genocide over 9 years (1914-1923).

3. Co-victims: Many people believe that the Holocaust involved just the mass slaughter of Jews. In fact the Nazis did not only exterminate the Jews. They also exterminated the disabled, homosexuals, Romani (Gypsies), Jehovah’s witnesses and others. In the case of the genocide in the Ottoman Empire, it wasn’t only Greeks who were massacred. Armenians, Assyrians, Yezidis, Jews and other groups were victims too.

4. Perpetrators/regimes: In the case of the Holocaust, the Nazis (or the Nationalist Socialist German Worker’s Party) came to power in 1933 and almost immediately set about in persecuting Jews and others. The Committee of Union and Progress (C.U.P), otherwise known as the Young Turks came to power in 1913 and immediately began implementing their plan to eradicate Greeks and other minorities.

5. Leading figures: The leader of the Nazi party was Adolf Hitler. He was to become one of the most ruthless dictators in the world. If we put aside the triumvirate of the Young Turks (Enver, Djemal and Talaat) who were in control of the C.U.P from 1913-1918, the man who rose to power in what is referred to as the Kemalist phase of the genocide, was Mustafa Kemal. He emerged in May 1919 to complete the genocide his predecessors – the triumvirate – had initiated. The difference being, that Mustafa Kemal was to remain a leader/dictator well after the genocide was complete, hence his title ‘Ataturk’ (meaning father of the Turks).
6. Paramilitary (Death squads): The main three paramilitary groups used by the Nazi’s to complete the Holocaust were the SA (Storm Troups), the SS (Elite Echelon) and the Gestapo (Secret police). The SS, also referred to as Hitler’s ‘Death’s Head Unit’ was responsible for the mass murder of the Jews. The paramilitary unit which was responsible for the genocide of Greeks was the Teshkilat-i Masusa otherwise known as the Special Organisation (S.O). This organisation was made up of current and former convicts, religious order groups, volunteer groups (Lazes and Kurds etc) as well as armed irregulars (chetes and brigands).

7. Ideology: The ideology in both genocides was based on myth. The Nazis were under the illusion that the Jews wanted to control the world, hence they had to be exterminated (The Final Solution). The Nazis also believed that the Aryans, a Nordic race who exhibited blonde hair and blue eyes, were the first to live in Germany and therefore all others were inferior. With the outbreak of WW1, the Turks believed that the Greeks living within the empire were disloyal or were supplying the enemy with goods. As a result, their ideology was to turn to one of ‘Turkey for the Turks’ and the eradication of all its ‘non-Turkish’ citizens had to be carried out.

8. Boycotting: The Nazis seized power in January of 1933. Within two months they carried out the first nationwide boycott of Jewish businesses. Storm Troops were to stand outside Jewish businesses and offices of professionals, and paint the Star of David across their doorways with signs saying ‘Don’t buy from the Jews’. Comparably the start of the Greek Genocide occurred on April 6, 1914 when the Turks boycotted Greek businesses in Eastern Thrace and later along the western shoreline of Asia Minor and the Black Sea. In both cases, boycotting was the first sign the genocides had begun.

9. Hate speech: Hitler outwardly spoke of his hatred of Jews. He referred to them as a plague, an epidemic, germ carriers, harmful bacillus, a cancer and as maggots. With the outbreak of WW1 in the Ottoman Empire, the Sultan issued a declaration of war effectively a Jihad against the people of the countries who it was fighting against (ie everyone except Germans and Austrians). A secret paper which was being distributed, wrote: “The world of Islam sinks down and goes backward and the Christian world goes forward and is more and more exalted. Take them and kill them whenever you find them. He who kills even one unbeliever of those who rule over us, whether he does it secretly or openly, shall be rewarded by God.”

10. Disaming: Hitler was able to disarm the Jews by enacting the 1938 German Weapons Act which prohibited Jews from possessing any dangerous weapon including guns. Jews were also forbidden from the manufacture or dealing of firearms and ammunition. In comparison, at the outbreak of WW1, the C.U.P was able to disarm the Greeks by forcing them into Labour Battalions, or Amele Taburu as they were called. The death toll in these battalions was as high as 90%, as men were sent into the interior of Asia Minor and made to do back breaking work with little food or water.

11. Deportations/Death marches: The majority of deportations of Jews occurred towards the end of WW2 when the allies were closing in on the Nazis, and Jews were deported away from the extermination camps and into the interior by train and by foot. The major method of extermination of the Jews was by the use of gas chambers, so deportation was not relied upon to exterminate them en masse. On the other hand, the Turks deported Greeks from virtually every region of Asia Minor and Eastern Thrace, usually to the interior, by foot, without food and water, and in many cases during the peak of winter, with intent to bring about their physical destruction without the need for bullets or other means.

12. Concentration Camps and Ghettos: While Jews had been living in ghettos for centuries in Europe, the Nazis enforced a ghetto system for the Jews in order to isolate them for the purpose of persecution. When the ‘Final Solution’ was to take effect in 1942, these ghettos were closed and Jews were sent to concentration, labour and extermination camps. In the Ottoman Empire, the Greeks were deported usually to destinations in the interior. On the 21st of April 1916, a New York Times article with the headline ‘Turks Deporting Greeks’ wrote “Civilian concentration camp victims attacked and despoiled. The Turkish authorities on the Black Sea regions are acting toward the Greeks in the same fashion as the Germans have done with regard to the civil populations of the occupied portions of north-eastern France.” So not only were Greeks sent to concentration camps and attacked and despoiled along the way, a German involvement also existed. It’s interesting to note that Germany who allied itself with the Ottoman Empire was in virtual control of the Ottoman military and was therefore complicit in the Greek Genocide.

13. Extermination methods: The major method of exterminating Jews was via lethal gas in extermination camps. In these camps, several hundred Jews at a time were locked into chambers and the lethal gas Zyclon-B was released. Tens of thousands of Jews were exterminated each day in this manner. While the Turks were not as advanced in their methods of exterminating Greeks, they were nonetheless effective. As mentioned, deportation was an effective way to exterminate the Greeks. Another common method was locking hundreds of Greeks in churches and burning them alive. Newspaper reports also point to lethal injections being used, parboiling, and dumping Greeks into the sea amongst others.

14. Resistance: Although the 1938 German Weapons Act prevented Jews from owning guns, the Jews did offer some resistance during the Holocaust. There were in fact over a hundred armed Jewish uprisings. One of the most notable groups was the Bielski partisans who armed themselves and spent more than two years living in the forests. They were to save many lives. Most are familiar with the resistance of the Greeks of the Pontus. By arming themselves, these Greeks were able to defend themselves and in the process save thousands of Pontic Greeks from extermination. Many however are not so familiar with the Greeks of Nicomedia (today Izmit) who likewise offered armed resistance.
By comparing all the above, we can see that the Greek Genocide has many parallels with that of the Jewish Holocaust, yet it remains largely forgotten and unrecognised. The German state has officially recognised the Holocaust and has to date paid some $90 billion in compensation to the victims. On the other hand, Turkey has continued to deny that the events of 1914-1923 were an act of genocide, instead labelling them as the result of civil war.

The crime of genocide has no place in society. Genocides should be punished regardless of when they occurred, in order to bring closure and justice to all survivors and their families, and to also act as a deterrent for those considering committing genocide in the future. The Greek Genocide is one such genocide which awaits recognition.