The discovery of a Roman cemetery in England has archaeologists scratching their heads, mainly because about 40 percent of the bodies buried there are missing theirs.

Well, not missing, exactly. Of the 52 skeletons discovered in the fourth-century A.D. cemetery, 17 had been decapitated. And almost every head was resting between its owner’s legs or feet.

It’s unclear why these decapitations happened, but “this appears to be a careful funeral rite that may be associated with a particular group within the local population,” Andy Peachey, an archaeologist with Archaeological Solutions, the company responsible for excavating the cemetery, told Live Science.

Archaeologists discovered the mysterious cemetery while surveying the village of Great Whelnetham in Suffolk, England, ahead of the construction of a housing development. It wasn’t a complete surprise that Roman remains were found there. Since 1964, archaeologists have known that a Roman settlement existed in the area, because researchers had uncovered Roman artifacts such as a pottery kiln, coins, cremations and burials. 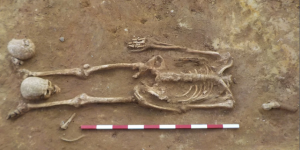 Even so, the archaeologists involved in the recent excavation were surprised to discover that so many of the deceased had been decapitated, Peachey said. An analysis of the skeletons revealed that these head choppings happened postmortem, he noted.

“The incisions through the neck were postmortem and were neatly placed just behind the jaw,” Peachey said. “An execution would cut lower through the neck and with violent force, and this is not present anywhere.”