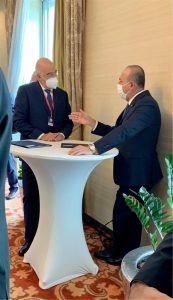 Erdogan: We will not retreat in the Aegean, we will not limit ourselves to our shores

The heads of Greek and Turkish diplomacy agreed to set a date for exploratory contacts, while the Greek minister expressed Greece’s reaction to Varosha.

This was the first meeting of Nikos Dendias with Mevlut Cavusoglu after months. This is because, since the announcement of September 22nd for the resumption of the informal Greek-Turkish exploratory talks, it has not yet been possible to set a date for the 61st round of the contacts.

The meeting was significant, especially after the provocative decision of The Turkish President Tayyip Erdogan to extend the entry permit to the Varosha coastal front, in violation of the decisions of the UN Security Council.

The provocative move by the Turkish government has already been condemned by Athens and Nicosia, as well as the UN, Russia and the EU, with the Cypriot government insisting that under these circumstances the possibility of resuming talks to resolve the Cyprus dispute is out of the question.
Tags With: cyprusdefencediplomacyexploratory talksgreeceGreek Foreign Minister Nikos DendiasmilitarynegotiationspoliticsturkeyTurkish Foreign Minister Mevlut Cavusogluwarworld