Sightings of great white sharks are rare in Hawaii, where the water is too warm

An enormous great white shark believed to be one of the biggest ever recorded, was spotted off the coast of Hawaii.

Divers saw what they perceived to be an opportunity to take a swim with the predator. 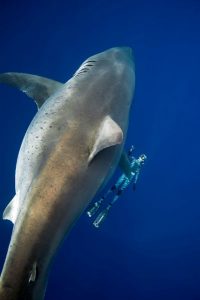 The predator along with other sharks was seeing feasting on a sperm whale carcass. 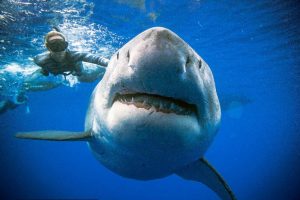 “We saw a few (tiger sharks) and then she came up and all the other sharks split, and she started brushing up against the boat,” said Ocean Ramsey, one of the divers, recounting the extraordinary encounter to the Honolulu Star Adviser.

“She was just this big beautiful gentle giant wanting to use our boat as a scratching post,” added Ramsey, who swam with the shark all day and captured stunning pictures. “We went out at sunrise, and she stayed with us pretty much throughout the day.” 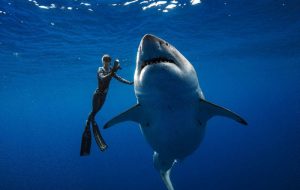