He was interviewed by a Turkish newspaper

Presenting the tense situation in the Aegean Sea, from the Turkish perspective and its permanent aspirations in the Aegean Sea, Sabah newspaper provocatively claims that: “Greece has continued to escalate the tension since January 25, when the exploratory talks began”.

According to the newspaper, the incident with the…”harassment” of “Cesme” by four Greek F-16s on Tuesday, a fact that the Greek Ministry of National Defence categorically denied, “added a new episode to the provocations in the Aegean”.

The article wonders what is the “purpose of Greece’s provocations” and whether it wants to “start a war” with Turkey. The rhetorical question was tabled by retired Admiral Ali Deniz Kutluk who was interviewed by the newspaper. 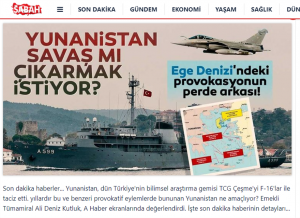 Kutluk claims that Greece has chosen a “dangerous game” in the Aegean Sea, having the support of the USA and the EU. “Greek pilots grew up with a hostile mindset towards Turkey. But this harassment is contrary to the rules of international law and military tactics. Cesme is free to conduct scientific research in these high seas and international waters. It does not threaten anyone,” he said.

The retired admiral calls on Ankara to move directly to the US and the EU, so that Turkey gains “more sympathy”, but also to face the Greek challenges with determination. He demands that the issue of disarmament of the Greek Aegean islands be raised, as well as the issue of the sovereignty of dozens of islands, isles, and islets with an “unspecified status”, as he claimed.