NASA has announced some preliminary results from its Twins Study, an effort to study the effects of space travel on human health. The early findings suggest space travel boosts methylation, the process of switching genes on and off.

“Some of the most exciting things that we’ve seen from looking at gene expression in space is that we really see an explosion, like fireworks taking off, as soon as the human body gets into space,” Chris Mason, lead researcher on the Twins Study, said in a news release late Tuesday. “With this study, we’ve seen thousands and thousands of genes change how they are turned on and turned off. This happens as soon as an astronaut gets into space, and some of the activity persists temporarily upon return to Earth.”

The twins participating in the Twins Study are astronauts Scott and Mark Kelly. The pair is identical twins. Mark has served as the control, having remained on the ground. Scott spent most of 2015 in space as part of the so-called year-long mission.

When Scott returned to Earth in March 2016, NASA scientists collected a variety of tissue and biological samples and began analysis on the ways Scott’s genome had changed during his 340 days on the International Space Station.

“This study represents one of the most comprehensive views of human biology,” said Mason, an associate professor at Weill Cornell Medicine. “It really sets the bedrock for understanding molecular risks for space travel as well as ways to potentially protect and fix those genetic changes.”

Scientists expect to publish finalized results from the Twins Study in 2018. 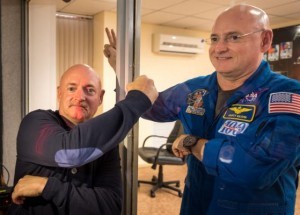