Traditionally, the great feast of the Epiphany marks the end of the extended period of Christmas holidays in Greece.

Each year on January 6, hundreds of thousands of Greeks and visitors participate in the rich traditions that are observed in each and every city and town in the country, making it one of the most special holidays of the year.

Epiphany is one of the most important Christian feasts of the entire year because it is the commemoration of the revelation of God as Jesus Christ.

Epiphany is also known as Theophany, and both of these terms derive from the Greek words for “revelation” and the “revelation of God,” or ”Επιφάνεια” (epipháneia) and ”Θεοφάνεια” (Theopháneia). 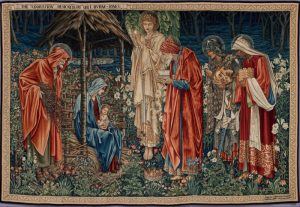 (“The Adoration of the Magi” tapestry by Edward Burne-Jones -1904-. Western Christians traditionally commemorate the visit of the Magi to the Christ Child on Epiphany)

This unique feast is celebrated by both the Eastern and Western Church, and millions of people around the world participate in liturgies, Masses and many other traditional events which take place on this day.

One exception to this rule, however, is the churches which continue to follow the Julian calendar. Most of these Eastern Orthodox Christians celebrate the Feast of Epiphany on January 19th, rather than the sixth, as does the rest of Christianity.