Police: “His death is unexplained at the moment, but not suspicious”

Michael died at his home in Goring, England. His publicist, Cindi Berger, said he had not been ill.

The world woke up in shock at the news of the famous singer’s death.

No further information will be released until the post mortem examination. 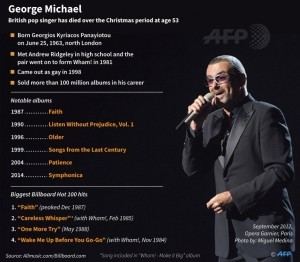 George Michael although he had retired the last years, he was working with producer Naughty Boy on a new album, while there was a planned release of a biographical documentary for 2017.

There was a statement released: “It is with great sadness that we can confirm our beloved son, brother and friend George passed away peacefully at home over the Christmas period. The family would ask that their privacy be respected at this difficult and emotional time. There will be no further comment at this stage.”

George Michael was born Georgios Kyriacos Panayiotou on June 25, 1963, in East Finchley, London, England. His father was a Greek immigrant restaurant owner, and his mother was an English dancer and English teacher. 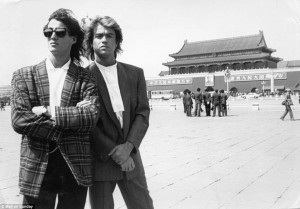 When still on High school he met schoolmate Andrew Ridgeley and after forming the band The Executive with Ridgeley’s brother, went on to form the duo WHAM! with Andrew on 1981.
At 1986 the duo split and they each followed solo carriers.

His life had several dark moments, with arrests related to drug use and careless driving. He openly admitted his homosexuality on 1998.

He had sold over 100 million albums and had won three American Music Awards.