British journalist Piers Morgan revealed his late friend, pom star George Michael had boasted having had sex with 500 partners in 7 years, during an open dinner party talk at mutual friend’s house in London. Piers said in his column in Mail on Sunday that the 53-year-old singer was very honest about his sexual exploits and personal life during the dinner and made him laugh. “I knew George pretty well, through various interviews and a sporadic, highly amusing email relationship, but nothing quite prepared me for that night. He was on outrageously indiscreet form, revealing that he’d slept with 500 men in the previous seven years”, Morgan said. He continued by saying that the singer had all of the party “heaving with laughter with his searing, shocking honestly.” He revealed that George never regretted being caught propositioning a policeman in a Beverly Hills public toilet, saying: ‘I was only sorry for offending some of my fans’. 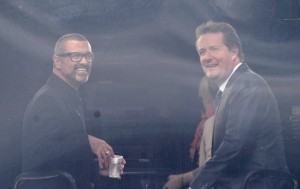