Dozens of perfectly preserved ancient shipwrecks have been found at the bottom of the Black Sea.

A total of 60 wrecks were discovered dating back as far as 2,500 years, including galleys from the Roman, Byzantine and Ottoman empires.

Scientists stumbled upon the graveyard while using underwater robots to survey the effects of climate change along the Bulgarian coast.

Because the Black Sea contains almost no light or oxygen, little life can survive, meaning the wrecks are in excellent condition.

Researchers say their discovery is ‘truly unrivalled’. Many of the ships have features that are only known from drawings or written description but never seen until now.

Carvings in the wood of some ships have remained intact for centuries, while well-preserved rope was found aboard one 2,000-year-old Roman vessel. 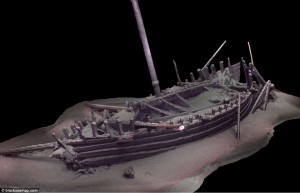 (Dozens of perfectly preserved ancient shipwrecks have been found at the bottom of the Black Sea. This image shows a 3D model of a Roman ship lying in over 2000m (650 ft) of water. Its mast still stands, both quarter rudders with their tillers are still attached. Rope is still draped over the frames due to the preservation of materials in the Black Sea’s anoxic conditions.)

Ed Parker, CEO of Black Sea MAP, said: ‘Some of the ships we discovered had only been seen on murals and mosaics until this moment.

‘There’s one medieval trading vessel where the towers on the bow and stern are pretty much still there.

‘It’s as if you are looking at a ship in a movie, with ropes still on the deck and carvings in the wood.

‘When I saw that ship, the excitement really started to mount – what we have found is truly unrivalled.’

Most of the vessels found are around 1,300 years old, but the oldest dates back to the 4th Century BC.

Many of the wrecks’ details and locations are being kept secret by the team to ensure they remain undisturbed.

Black Sea water below 150 metres (490 ft) is anoxic, meaning the environment cannot support the organisms that typically feast on organic materials, such as wood and flesh. 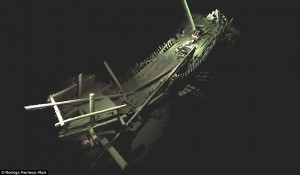 (The wrecks, such as this one from the Medieval period, are astonishingly well preserved due to the anoxic conditions (absence of oxygen) of the Black Sea below 150 metres (490 ft). This trading vessel was found with the towers on the bow and stern still mostly in place.)

As a result, there is an extraordinary opportunity for preservation, including shipwrecks and the cargoes they carried.

Ships lie hundreds or thousands of metres deep with their masts still standing, rudders in place, cargoes of amphorae and ship’s fittings lying on deck.

Many of the ships show structural features, fittings and equipment that are only known from drawings or written description but never seen until now. 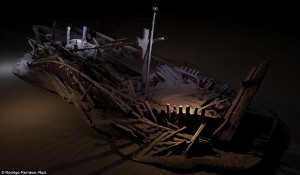 (Shown here is a shipwreck from the Ottoman period discovered 300 metres beneath the Black Sea. Many of the wrecks’ details and locations are being kept secret by the team to ensure they remain undisturbed.)

Project leader Professor Jon Adams, of the University of Southampton, said: ‘This assemblage must comprise one of the finest underwater museums of ships and seafaring in the world.’

The expedition has been scouring the waters 1,800 metres (5,900ft) below the surface of the Black Sea since 2015 using an off-shore vessel equipped with some of the most advanced underwater equipment in the world. 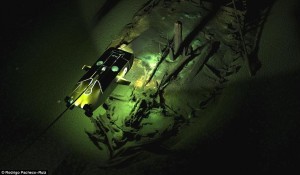 (The researchers used two Remotely Operated Vehicles (pictured) to survey the sea bed. These have discovered a number of wrecks over a series of expeditions spanning three years, including the one pictured from the Byzantine period, found in October last year.)

The vessel is on an expedition mapping submerged ancient landscapes which were inundated with water following the last Ice Age.

The researchers had discovered over 40 wrecks across two previous expeditions, but during their latest trip, which spanned several weeks and returned this month, they uncovered more than 20 new sites. 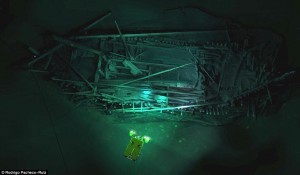 (While the primary focus of the project is to carry out geophysical surveys, shipwrecks, including this one from the Ottoman period, have given new insights into how communities live on the shores of the Black Sea.)

Returning to the Port of Burgas in Bulgaria, Professor Jon Adams said: ‘Black Sea MAP now draws towards the end of its third season, acquiring more than 1300km [800 miles] of survey so far, recovering another 100m (330 ft) of sediment core samples and discovering over 20 new wreck sites, some dating to the Byzantine, Roman and Hellenistic periods.’ 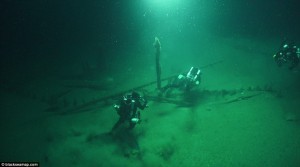 (Scientists have accidentally discovered a graveyard of ancient shipwrecks while using underwater Remotely Operated Vehicles to survey the effects of climate change along the Bulgarian coast. Pictured are researchers exploring a recently discovered 2,000-year-old Roman galley buried in the seabed.)

One is optimised for high resolution 3D photography, while the other, called Surveyor Interceptor, ‘flies’ at four times the speed of conventional ROVs.

The Interceptor carries an entire suite of geophysical instrumentation, as well as lights, high definition cameras and a laser scanner. 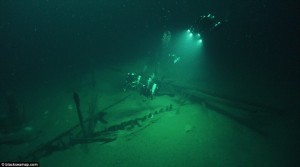 (The researchers had discovered over 40 wrecks across two previous expeditions, but during their latest trip, which returned this month, they uncovered more than 20 new sites, including this 2,000-year-old Roman galley)

Since the project started, Surveyor Interceptor has set new records for depth at 5,900ft (1,800 metres) and sustained speed of over six knots (7mph), and has covered 1,250 kilometres (776 miles).

Among the wrecks are ships from the Roman, Ottoman and Byzantine Empires, which provide new information on the communities on the Black Sea coast. 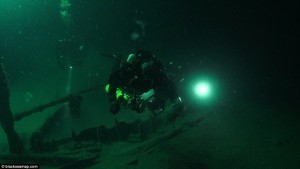 (Project leader Professor Jon Adams (pictured), of the University of Southampton, said: ‘This assemblage must comprise one of the finest underwater museums of ships and seafaring in the world’.)

Many of the colonial and commercial activities of ancient Greece and Rome, and of the Byzantine Empire, centred on the Black Sea.

After 1453, when the Ottoman Turks occupied Constantinople – and changed its name to Istanbul – the Black Sea was virtually closed to foreign commerce. 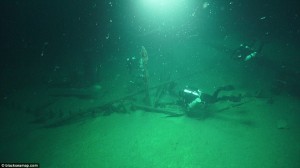 (Carvings in the wood of some ships have remained intact for hundreds of years, while well-preserved rope was found aboard one Roman ship, the galley of which is pictured in this image.)

Nearly 400 years later, in 1856, the Treaty of Paris re-opened the sea to the commerce of all nations.

The scientists were followed by Bafta-winning filmmakers for much of the three-year project and a documentary is expected in the coming years. 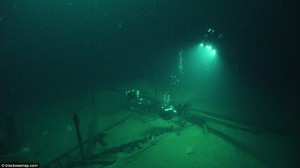 Producer Andy Byatt, who worked on the David Attenborough BBC series ‘Blue Planet’, said: ‘I think we have all been blown away by the remarkable finds that Professor Adams and his team have made.

‘The quality of the footage revealing this hidden world is absolutely unique.’