Over 100 flights landed at the regional airports across the country

The first day of July marked the return to the new normal in terms of tourism in Greece, as the country officially re-opened its land, air and sea borders to a number of countries after the 2 month lockdown due too the Covid-19 pandemic. There were over 100 inbound flights from broad at the regional airports.

Contrary to the the global state of affairs in relation to the pandemic where a resurgence of the virus is being noted, in Greece it has steadily declined, allowing the country,in compliance with the European decision, to re-open in an effort to restore tourism and save the already wounded Greek economy. 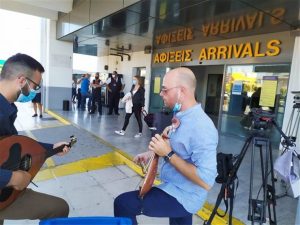 The first tourists who set foot on the island of Crete were welcomed by traditional local music. To mark the occasion two fire engines were waiting for a plane from Germany, while outside the airport of Heraklion “Nikos Kazantzakis” there were lyres that under the sounds of Cretan music welcomed the passengers of the flight. Heraklion Mayor Vassilis Lambrinos was also present with Heraklion Deputy Regional Governor Kyriakos Kotsoglou. 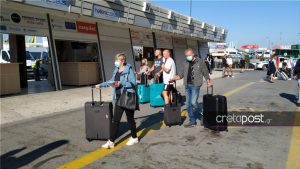 Direct flights from the United Kingdom and Sweden are not allowed (until 15 July). 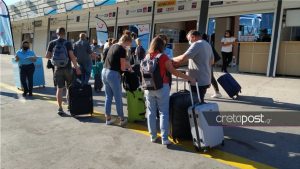 As far as China is concerned, the issue will be considered on the basis of reciprocity. All other direct flights are permitted. At the same time, the arrival of ships coming from abroad to Greek ports will be allowed. Greece’s road connection with Turkey, Bulgaria and Albania is also fully restored.

Tourists must complete a special online form 48 hours before their trip to Greece and will then receive a special code, which will classify them into “green” and “red” travellers, denoting risk category assigned to them.

Authorities will also know their place of residence, the country of departure, the intermediate station, but also the hotel where they will be staying.