Mr. Kammenos says that when people and army are united they cannot be defeated

Greek Defence Minister Panos Kammenos watched over a military exercise carried out by a platoon of national guards involving the elimination of a bailey bridge in Thasos. “When the people and military are united, no-one can deny them”, Mr. Kammenos said after the completion of the drill. Addressing the soldiers, the Greek Defence Minister went on to say that “if a people is not ready to contribute to the military at any given moment to defend the nation’s borders and lacks morale that you displayed today, it cannot avert a threat”. “From Thasos, which we shall be visiting more often, we are sending a message to all those considering challenging our national sovereignty and the integrity of our land. We will not allow anyone to set foot on this land. We will defend our soil, our flags, our islands, our mainland, our isles till the last drop of our blood, as we have vowed to do”, Mr. Kammenos said. The Greek Defence Minister praised the operational readiness of the national guard. “Our national guard is ready to defend our lands. It is our main force of prevention along with the tactical army”, he stressed, announcing the creation of a new shooting range in Thasos for the guard. 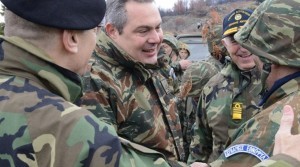 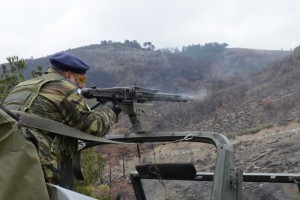